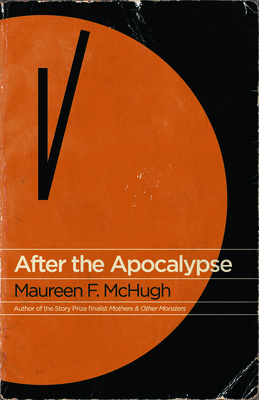 In her new collection, Story Prize finalist Maureen F. McHugh delves into the dark heart of contemporary life and life five minutes from now and how easy it is to mix up one with the other. Her stories are post-bird flu, in the middle of medical trials, wondering if our computers are smarter than us, wondering when our jobs are going to be outsourced overseas, wondering if we are who we say we are, and not sure what we'd do to survive the coming zombie plague.

Praise For After the Apocalypse: Stories…

"Incisive, contemporary, and always surprising, McHugh's second collection confronts near-future life with an ironic and particular eye. Her characters live with zombies, struggle to make ends meet on the ArizonaMexico border, and cope with China's descent into capitalism in stories that stretch the boundaries of imagination."
Publishers Weekly Top 10 Best of the Year

"Superb.... Against backdrops of sheer terror, Ms. McHugh's characters insist on investing themselves in flirtations, friendships and jobs. They keep their innocent curiosity for the world even as it falls to pieces."
Wall Street Journal

The stories in After the Apocalypse will catch many readers off-guard; they’re suspenseful, but they never quite go where you expect them to. The end of the world as we know it will never be the same again.”
Salon

The best stories in this mesmerizing collection from the L.A. writer are the ones that elude categorizationthe struggles of a troubled doll maker in Useless Things,” the fantasies of an impulsive man in Going to France.” It’s the ordinary and everyday that we should be afraid of, not the prospect of big explosions and world-ending catastrophes. This is a pro stretching a genre to its limitssubverting, inverting, perverting, disturbing.”
Los Angeles Magazine

These nine stories take place in a world that has been ravaged by prion diseases and economic collapse, even as it enters a new age of artificial intelligence and green biotech. You won’t be able to forget the people you meet there.”
io9

One of the best short story collections I’ve read in the last decade.”
Chris Moriarty, F&SF

McHugh’s approach to the apocalypse is oblique, a concern with the personal, the individual or family unit, rather than the devastation that surrounds them. [T]here are perhaps half a dozen stories that are as powerful as anything you are likely to read this year.”
Strange Horizons

Hugo-winner McHugh (Mothers & Other Monsters) puts a human face on global disaster in nine fierce, wry, stark, beautiful stories. . . . As McHugh’s entirely ordinary characters begin to understand how their lives have been transformed by events far beyond their control, some shrink in horror while others are matter of fact as a heart attack,” but there is no suicidal drama, and the overall effect is optimistic: we may wreck our planet, our economies, and our bodies, but every apocalypse will have an after” in which people find their own peculiar ways of getting by.”
Publishers Weekly (*starred review*)

Like George Saunders (CivilWarLand in Bad Decline, 1996), McHugh displays an uncanny ability to hook into our prevailing end-of-the-world paranoia and feed it back to us in refreshingly original and frequently funny stories. In these nine apocalyptic tales, people facing catastrophes, from a zombie plague to a fatal illness contracted from eating chicken nuggets, do their best to cope. In Useless Things,” perhaps the most affecting story in the collection, a resourceful sculptor, worried about drought and money in a time of high unemployment and increasing lawlessness, turns her exquisite crafstmanship to fashioning sex toys and selling them on the Internet with the hope of making enough money to pay her property taxes. In Honeymoon,” a participant in a medical trial that goes horribly wrong watches in horror as six men are hospitalzed in critical condition; she uses her payment to take a vacation because, when all was said and done, she wanted to dance. It didn’t seem like a bad choice.” That survival instinct is what makes McHugh’s collection a surprisingly sunny read in spite of the global disasters that threaten at every turn. An imaginative homage to the human ability to endure.”
Booklist (*starred review*)

Maureen F. McHugh: Maureen F. McHugh has lived in NYC, Shijiazhuang, China, Ohio, Austin, Texas, and now lives in Los Angeles. She is the author of a collection, Mothers & Other Monsters (Story Prize finalist), and four novels, including China Mountain Zhang (Tiptree Award winner) and Nekropolis (a New York Times Editor's Choice). McHugh has also worked on alternate reality games for Halo 2, The Watchmen, and Nine Inch Nails, among others.
Loading...
or support indie stores by buying on