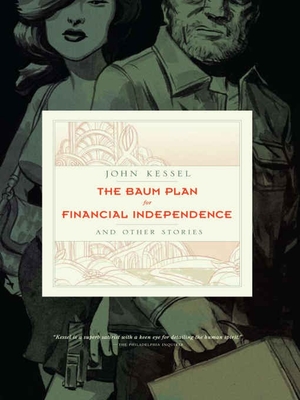 The Baum Plan for Financial Independence

Pride and Prometheus, a story in The Baum Plan for Financial Independence involving characters from Jane Austen's Pride and Prejudice and Mary Shelley's Frankenstein, is winner of the 2008 Nebula award for Best Novelette.

A long-awaited collection of fourteen stories that intersect imaginatively with Pride and Prejudice, Frankenstein, The Wizard of Oz, and Flannery O'Connor. Kessel, whose story A Clean Escape was filmed as part of ABC's Masters of Science Fiction, ranges through genres with a lean, graceful style that incorporates everything from future autobiography, alternate history, phone sex, perpetual motion, and his modern classic sequence of four stories about life on the moon.

In his first collection in a decade, Kessel jumps from place to place like a jolty time machine. In Pride and Prometheus, Frankenstein and Jane Austen intersect in an uncanny Victorian tale of unrequited love, while A Lunar Quartet introduces a matriarchal, hypersexual moon colony in the future. But as a group, these stories offer a sustained exploration of the ways gender dynamics can both empower and enslave us. Kessel's wit sparkles throughout, peaking with the most uproariously weird phone-sex conversation you'll ever read (The Red Phone). A-
--Entertainment Weekly

Anyone who thinks genre writing can't be literary deserves to have Kessel's hefty new collection of stories dropped on his or her head.
--Time Out Chicago

A pleasant callback to the days when science-fiction authors read more than just science fiction.
--The Seattle Stranger

Kessel proves himself again a master not just of science fiction, but also of the modern short story, crafting compelling characters and following them through plots that never fail to please--or to defy prediction.
--Metro Magazine

One of the best collections of the year.
--Locus

Kessel is a deft stylist and a master of all his tools, whose range is nearly limitless.
--SciFi.com

John Kessel's writing exists at the edge of things, in the dark corner where the fiction section abuts the science-fiction shelves, in the hyphen where magic meets realism. Reading Kessel's wonderful fabulations is like staying out too late partying and seeing strange angels while stumbling home in the dawn's first light. This is one of those too rare short story collections that you can recommend with confidence to both the literary snob and the hard-core computer geek.
--Rich Rennicks, Malaprop's Bookstore, Asheville, NC

Invest. Invest now.... Your returns will be multitudinous.
--The Fix

John Kessel co-directs the creative writing program at North Carolina State University in Raleigh. A winner of the Nebula, Sturgeon, Locus, and Tiptree awards, his books include Good News from Outer Space, Corrupting Dr. Nice, and The Pure Product, and story collection, Meeting in Infinity (a New York Times Notable Book).
Most recently, with James Patrick Kelly he edited the anthologies Feeling Very Strange: The Slipstream Anthology, Rewired: The Post-Cyberpunk Anthology, and The Secret History of Science Fiction. He lives in Raleigh, North Carolina.

John Kessel's stories have won the Nebula, Sturgeon, Locus, and Tiptree Awards. His books include Good News from Outer Space, Corrupting Dr. Nice, and collections The Pure Product and Meeting in Infinity (a New York Times Notable Book). Kessel and his family live in Raleigh, NC, where he co-directs the creative writing program at North Carolina State University.
Loading...
or support indie stores by buying on