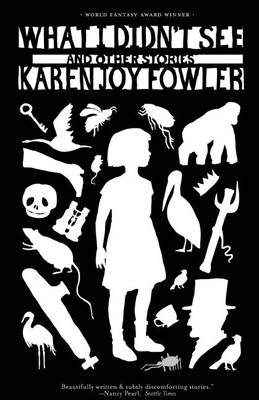 What I Didn't See (Hardcover)

"No contemporary writer creates characters more appealing, or examines them with greater acuity and forgiveness."--Michael Chabon

"Fowler's witty writing is a joy to read."--USA Today

In her moving and elegant new collection, New York Times bestseller Karen Joy Fowler writes about John Wilkes Booth's younger brother, a one-winged man, a California cult, and a pair of twins, and she digs into our past, present, and future in the quiet, witty, and incisive way only she can.

The sinister and the magical are always lurking just below the surface: for a mother who invents a fairy-tale world for her son in "Halfway People"; for Edwin Booth in "Edwin's Ghost," haunted by his fame as "America's Hamlet" and his brother's terrible actions; for Norah, a rebellious teenager facing torture in "The Pelican Bar" as she confronts Mama Strong, the sadistic boss of a rehabilitation facility; for the narrator recounting her descent in "What I Didn't See."

With clear and insightful prose, Fowler's stories measure the human capacities for hope and despair, brutality and kindness. This collection, which includes two Nebula Award winners, is sure to delight readers, even as it pulls the rug out from underneath them.

Karen Joy Fowler is the author of five novels, including Wit's End and The Jane Austen Book Club, which spent thirteen weeks on the New York Times bestsellers list, was a New York Times Notable Book, and was adapted as a major motion picture from Sony Pictures. Her novel Sister Noon was a finalist for the PEN/Faulkner Award for fiction, and her short story collection Black Glass won the World Fantasy Award. She has co-edited three volumes of The James Tiptree Award Anthology and wrote the introduction to the recent Penguin edition of The Complete Novels of Jane Austen. Fowler and her husband, who have two grown children, live in Santa Cruz, California.

Praise For What I Didn't See: Stories…

One of the most accomplished and most adroit fiction writers in America.”
Brooks Landon, Los Angeles Review of Books

Gripping from the start.... We are can never be sure where we are or what each page might bring. This is eclectic approach to a collection is exciting, and steers us away from the safer approach that many other collections take. ”
The Short Review

Refuses to engage fantastic elements in an expected way, often confining them to the edges of a story, leaving the choice of how real a character’s perception is to the reader. Her work reflects how strange and unpredictable life is, how difficultperhaps impossibleto fully understand.”
Gwenda Bond, Subterranean Online

Because of this range and because of the plain high literary quality of so many of its stories, What I Didn’t See would provide an excellent introduction to Fowler’s work if you’ve somehow managed to remain unacquainted with it.”
Strange Horizons

An exceptionally versatile author . . . Fowler has the best possible combination of imagination and pragmatism,” as she applies unique narratives into carefully crafted structures.”
St. Louis Post-Dispatch

In all these stories, Fowler (Sarah Canary, The Jane Austen Book Club) delights in luring her readers from the walks of ordinary life into darker, more fantastical realms. There, as one of her characters remarks, Your eyes no longer impose any limit on the things you can see.” . . . Fowler’s closing story, King Rat,” is a masterpiece. Reading more like a personal essay than fiction, it pays eloquent tribute to the two men I credit with making me a writer.” Here’s a volume that serves as a fine introduction to Fowler, if you haven’t come across her beforeand one that will deeply satisfy fans who’ve been with her from the beginning.”
Seattle Times

That rare writer who can match the power of her novels with the power of her short stories. She works in the world of myth with great ease. We feel, reading her stories, that we are in our world, but some portion of it that connects vitally with everything else. What happens here is gripping, important, compelling, and often terrifying. Her new collection of stories, What I Didn’t See offers readers perfect renderings of a New American Mythos”
Rick Kleffel, The Agony Column

Karen Joy Fowler takes the short story in directions readers could never anticipate, and her latest collection from the wonderful Small Beer Press, What I Didn’t See: Stories, offers up numerous delights for the smart and creative reader. From the wham-bang start of The Pelican Bar” to the Hemingway-esque title story, Fowler takes you from the past to the future in stories that feature speculative fiction elements, or are starkly true to life. Cast your preconceived notions aside and settle in to explore the human mysteries Fowler mines with abandon. This is literature at its most intriguing, and a reminder of how bold and daring a gifted writer can be.”
Colleen Mondor, Bookslut

The practicality of her views is what makes them upsetting, a reminder how tragedies great and small affect people everyday even if we aren’t privy to them. And that is where Fowler succeeds even if her brutal boarding houses or Congolese misadventures aren’t real to us, post-traumatic stress disorder is. All of her narrators are survivors, and they tell their stories in blunt, practical ways we imagine they need to protect themselves.”
For Books’ Sakes

Fowler cements her place in fiction historygenre or otherwisenot because of her fancy tricks but through sheer technique and her excellence in characterization.”
Charles Tan, Bibliophile Stalker

"These stories, characterized by obsession, disappearance, and revelation, often feature first-person narratorse.g., the smart, sarcastic resident of a cult whose leader promises immortality but forbids sex with anyone but himself; John Wilkes Booth; a druggy teenage girl whose parents have foisted her off in the name of tough love; a woman who accompanies her husband on a jungle mission (what she did or didn't see feels like a riff on Joseph Conrad); and an expert on historical and contemporary instances of the bubonic plague. Fowler's previous short story collection, Black Glass, won the World Fantasy Award. Several stories here also fall within the realm of fantasy and sf, having appeared for the first time in publications like Asimov's Science Fiction. However, Fowler is surely best known today as the author of The Jane Austen Book Club, a novel in which we learn, among other things, that sf readers and Austenites have more in common than we might think. VERDICT In these captivating stories, Fowler's discerning eye makes the incredible feel entirely credible."
Library Journal

The bestselling author of The Jane Austen Book Club goes genre-busting in this engrossing and thought-provoking set of short stories that mix history, sci-fi, and fantasy elements with a strong literary voice. Whether examining the machinations of a Northern California cult, in Always,” or a vague but obviously horrific violent act in the eerie title story, the PEN/Faulkner finalist displays a gift for thrusting familiar characters into bizarre, off-kilter scenarios. Fowler never strays from the anchor of human emotion that makes her characters so believable, even when chronicling the history of epidemics, ancient archeological digs, single family submersibles, or fallen angels. She even displays a keen understanding of the historical world around Lincoln’s assassin, John Wilkes Booth, in two wonderfully realized historical pieces. Her writing is sharp, playful, and filled with insights into the human condition. The genre shifts might surprise fans of her mainstream hit, but within these pages they’ll find familiar dramas and crises that entertain, illuminate, and question the reality that surrounds us.”
Publishers Weekly