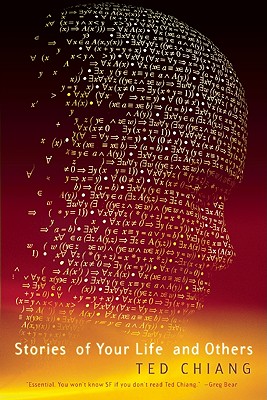 Stories of Your Life

Soon to be a major motion picture starring Amy Adams.
This new edition of Ted Chiang's masterful first collection, "Stories of Your Life and Others," includes his first eight published stories plus the author's story notes and a cover that the author commissioned himself. Combining the precision and scientific curiosity of Kim Stanley Robinson with Lorrie Moore's cool, clear love of language and narrative intricacy, this award-winning collection offers readers the dual delights of the very, very strange and the heartbreakingly familiar.
"Stories of Your Life and Others" presents characters who must confront sudden changethe inevitable rise of automatons or the appearance of alienswhile striving to maintain some sense of normalcy. In the amazing and much-lauded title story, a grieving mother copes with divorce and the death of her daughter by drawing on her knowledge of alien languages and non-linear memory recollection. A clever pastiche of news reports and interviews chronicles a college's initiative to "turn off" the human ability to recognize beauty in "Liking What You See: A Documentary." With sharp intelligence and humor, Chiang examines what it means to be alive in a world marked by uncertainty and constant change, and also by beauty and wonder.
Ted Chiang is one of the most celebrated science fiction authors writing today and is the author of numerous short stories, including most recently "Exhalation," which won the Hugo, British Science Fiction, and Locus awards. He lives near Seattle.

Praise For Stories of Your Life: And Others…

"Shining, haunting, mind-blowing talesthis collection is a pure marvel. [Ted] Chiang is so exhilarating so original so stylish he just leaves you speechless. I always suggest a person read at least 52 books a year for proper mental functioning but if you only have time for one, be at peace: you found it."Junot Díaz

"United by a humane intelligence that speaks very directly to the reader, and makes us experience each story with immediacy and Chiang’s calm passion."China Mieville

"Ted is a national treasureeach of those stories is a goddamned jewel."Cory Doctorow, BoingBoing

"Confirms that blending science and fine art at this length can produce touching works, tales as intimate as our own blood cells, with the structural strength of just-discovered industrial alloys."Seattle Times

"Chiang derides lazy thinking, weasels it out of its hiding place, and leaves it cowering."Washington Post

"Chiang writes seldom, but his almost unfathomably wonderful stories tick away with the precision of a Swiss watchand explode in your awareness with shocking, devastating force."Kirkus Reviews (Starred Review)

"He puts the science back in science fictionbrilliantly."Booklist (Starred Review)

Ted Chiang was born in Port Jefferson, New York and holds a degree in computer science from Brown University. In 1989 he attended the Clarion Writers Workshop. His fiction has won three Hugos, four Nebulas, three Locus awards, the John W. Campbell, and Sturgeon awards. He lives near Seattle, Washington.
Loading...
or
Not Currently Available for Direct Purchase