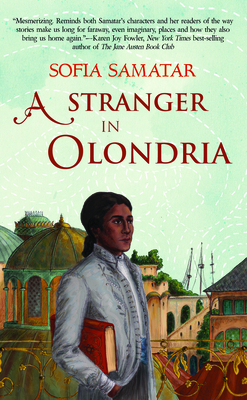 A Stranger in Olondria

Jevick, the pepper merchant's son, has been raised on stories of Olondria, a distant land where books are as common as they are rare in his home. When his father dies and Jevick takes his place on the yearly selling trip to Olondria, Jevick's life is as close to perfect as he can imagine. But just as he revels in Olondria's Rabelaisian Feast of Birds, he is pulled drastically off course and becomes haunted by the ghost of an illiterate young girl. In desperation, Jevick seeks the aid of Olondrian priests and quickly becomes a pawn in the struggle between the empire's two most powerful cults. Yet even as the country shimmers on the cusp of war, he must face his ghost and learn her story before he has any chance of becoming free by setting her free: an ordeal that challenges his understanding of art and life, home and exile, and the limits of that seductive necromancy, reading. A Stranger in Olondria is a skillful and immersive debut fantasy novel that pulls the reader in deeper and deeper with twists and turns reminiscent of George R. R. Martin and Joe Hill.

Praise For A Stranger in Olondria…

"A book about the love of books. Her sentences are intoxicating and one can easily be lost in their intricacy.... Samatar’s beautifully written book is one that will be treasured by book lovers everywhere.”
Raul M. Chapa, BookPeople, Austin, TX

"Thoroughly engaging and thoroughly original. A story of ghosts and books, treachery and mystery, ingeniously conceived and beautifully written. One of the best fantasy novels I've read in recent years."Jeffrey Ford, author of The Girl in the Glass

"Mesmerizinga sustained and dreamy enchantment. A Stranger in Olondria reminds both Samatar's characters and her readers of the way stories make us long for far-away, even imaginary, places and how they also bring us home again."Karen Joy Fowler, New York Times bestselling author of The Jane Austen Book Club

"Gorgeous writing, beautiful and sensual and so precisea Proustian ghost story."Paul Witcover, author of Tumbling After

"Let the world take note of this dazzling and accomplished fantasy. Sofia Samatar's debut novel is both exhilarating epic adventure and loving invocation of what it means to live through story, poetry, language. She writes like the heir of Ursula K. Le Guin and Gene Wolfe."Kelly Link, author of Magic for Beginners

"Imagine an inlaid cabinet, its drawers within drawers filled with spices, roses, amulets, bright cities, bones, and shadows. Sofia Samatar is a merchant of won-ders, and her A Stranger in Olondria is a bookshop of dreams."Greer Gilman, author of Cloud and Ashes

Sofia Samatar is an American of Somali and Swiss-German Mennonite background. She wrote A Stranger in Olandria in Yambio, South Sudan, where she worked as an English teacher. She has worked in Egypt and is pursuing a PhD in African Languages and Literature at the University of Madison, WI.
Loading...
or support indie stores by buying on