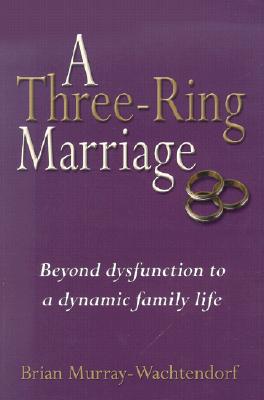 Beyond Dysfunction to a Dynamic Family Life

Brian Murray-Wachtendorf had a dream that one day he would live in a world free of abusive parents and the dysfunction caused by alcoholism, where children are cherished as the wealth of a family. This dream was not only for him, but for all children. Brian spent his formative years in the housing projects of Little Rock, Arkansas. From there he moved from school to school, foster home to foster home, and learned to survive by his wit and determination. Through the deepest valleys of despair to the summits of emotional exaltation, his story underscores the resiliency of the human spirit. Brian is a survivor of incest, horrible abuse, and the resulting self-indulgence and destructive behavior, but he was always aware there was a better way. Beginning at an early age Brian saw what was wrong, and instead of saying, I can't, he said, I will.A Three-Ring Marriage: Beyond Dysfunction to a Dynamic Family Life also explores Brian's unorthodox family of two wives and seven children with candor and enlightenment. Regardless of a person's belief system, background or family structure, there is something in this book for everyone. Anyone who has ever asked, do I make a difference? should read this book. As he shares his discoveries in this poignant story of personal and family development, we find there is a little touch of Brian in us all.

Brian Murray-Wachtendorf was born in the early sixties to alcoholic parents in Little Rock, Arkansas. After a tumultuous childhood, he enlisted in the U.S. Coast Guard. In 1982 he enrolled at the University of Central Arkansas where he received his Bachelor's. Following more rough times, Brian made his living as a professional and award-winning photographer for 10 years. Married for sixteen and fourteen years to two beautiful spirited women, Brian lives with his two wives and seven children in a magnificent log home they built themselves on a farm in Texas. Brian works as a behavior specialist with emotionally disturbed children in the public school system, and speaks often to young and old alike about the ailments of the modern family.
or
Not Currently Available for Direct Purchase
Copyright © 2020 American Booksellers Association