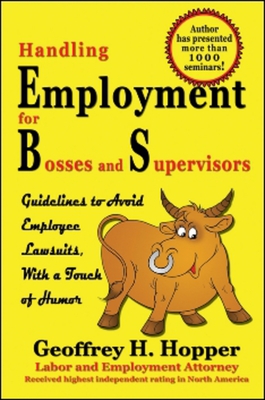 Handling Employment B.S. is a plain-spoken, interesting and sometimes humorous compilation of the most common employment problems confronting bosses/supervisors throughout the world. The primary goal is to disseminate knowledge and training to bosses/supervisors to avoid the day-to-day problems encountered in the employment relationship, and employment litigation and employment administrative claims.It is estimated that one out of three bosses/supervisors will be involved in claims during their careers, frequently in the six and seven digit numbers, which can literally destroy a business, oftentimes with bosses or supervisors initially oblivious they were in violation of any laws. Geoffrey Hopper avoids the use of legalese when covering methodologies in terminating individuals' employment, wage and hour issues, union organizing activities, workers' compensation problems, etc. The book also delivers ideas and suggestions on how to get the most from employees by bosses/supervisors as well as providing to employees tremendous insights as to their own working environment and ways for them to improve their own work environment as well.

Considered one of the best attorneys in the US, Hopper received the highest independent rating available for attorneys. Focusing on employment and labor law in his career, he has been well-received giving lectures/seminars to corporations, colleges, universities, law schools, and bar associations to tens of thousands. His law firm, Geoffrey H. Hopper & Associates, is in Redlands, CA.
or support indie stores by buying on
Copyright © 2020 American Booksellers Association