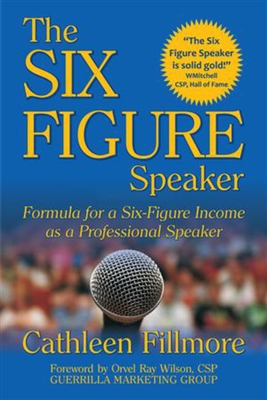 Formula for a Six-Figure Income as a Professional Speaker

The Six-Figure Speaker shows professional speakers a variety of ways to earn a high six figure income doing what they love to do. Cathleen Fillmore openly shares what she's learned operating a bureau and working with individual speakers over the years. She's also interviewed some of the world's top paid speakers and discovered that not one has taken a strictly conventional route to success. They talk candidly about what has worked for them and what pitfalls speakers need to avoid.Cathleen has held nothing back in her straight talk with speakers on how they can create their own formula for six-figure success in the professional speaking arena. She'll suggest a few different routes to take and some to absolutely avoid on the way to the top. There is information in this book that you won't find anywhere else.

Cathleen Fillmore, President of Speakers Gold, is author of four books and hundreds of articles. She's an award winning writer and a certified professional consultant. Cathleen is event coordinator for The American Chamber of Commerce in Canada. One of North America's top speaker consultants, Cathleen works with speakers who want to implement their own six-figure plan.
Loading...
or
Not Currently Available for Direct Purchase