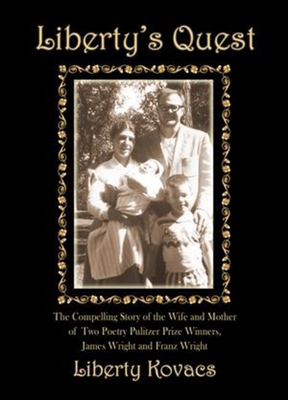 Liberty Kovacs' life story has all the elements of the American Dream, both its myth and its reality. Breaking free from the patriarchal rule of her Greek immigrant family, she set an uneasy but independent course that led to her becoming a nurse and marrying fellow Ohioan, the poet James Wright. Headed for the fabled Land of Happiness, Life broke in with all its unpredictable misery: living in Minneapolis with their two sons, the marriage was soon riven by alcoholism, angers, unspeakable trauma and eventually bitter divorce. Bereft but courageous, Liberty set a new course and headed west to San Francisco where she had a scholarship to study psychiatric nursing. A single mother, she experienced triumphs in her profession, married again and bore a third son - that household too fell victim to unhappiness and despairs. Yet with each blow, her spirit rose again and again, never giving up on herself or her sons, whom she writes about with disarming openness. -Merrill Leffler, publisher of Dryad Press, author of Partly Panemonium, Partly Love, Take Hold

Kovacs is a self-actualized Greek-American octogenarian who grew up (and lived much of her adult life) between cultures. She not only changed generational patterns and went to nursing school and college at the price of being disowned by her father, but she earned her Ph.D. at age 52 and worked as a marriage and family therapist into her late seventies.
or
Not Currently Available for Direct Purchase
Copyright © 2020 American Booksellers Association