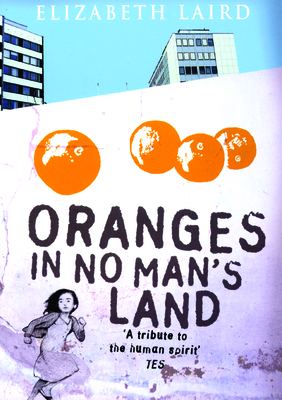 Oranges in No Man's Land

Oranges in No Man's Land tells the riveting story of ten-year-old Ayesha's terrifying journey across no man's land to reach a doctor in hostile territory in search of medicine for her dying grandmother.

Set in Lebanon during the civil war, this story is told by award-winning author Elizabeth Laird and is based on personal, real-life events. Elizabeth stayed on the green line in Beirut in 1977 in a war-damaged flat with her husband and six-month-old son. Memories of her son sleeping in a suitcase on the floor, taking his first steps on the bullet-riddled balcony, playing with the soldiers on the checkpoint, and her husband racing through no man's land in the buildup to a battle have all inspired this gripping and moving story.

Elizabeth Laird says, "When I wrote Oranges in No Man's Land, I didn't know that Lebanon would be plunged back so soon into a nightmare. Caught up in that nightmare are children like Ayesha and Samar, whose lives political leaders so easily throw away."

Elizabeth Laird has been nominated four times for the Carnegie Medal and has won both the Nestl Smarties Book Prize and the Children's Book Award (UK). Her numerous books, including A Little Piece of Ground (Haymarket Books, 2006), have been published around the world.

Multiple award-winning novelist Elizabeth Laird is the author of numerous children's books based on themes of social inequality. She lives in Surrey, England.
Loading...
or support indie stores by buying on