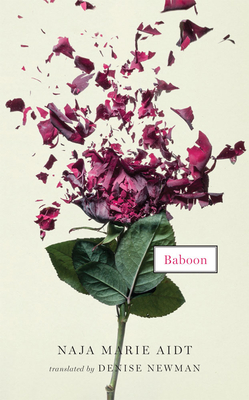 Beginning in the middle of crisis, then accelerating through plots that grow stranger by the page, Naja Marie Aidt's stories have a feel all their own. Though they are built around the common themes of sex, love, desire, and gender, Aidt pushes them into her own desperate, frantic realm. In one, a whore shows up unannounced at a man's apartment, roosts in his living room, and then violently threatens him when he tries to make her leave. In another, a wife takes her husband to a city where it is women, not men, who are the dominant sex--but was it all a hallucination when she finds herself tied to a board and dragged back to his car? And in the unforgettable "Blackcurrant," two young women who have turned away from men and toward lesbianism abscond to a farm, where they discover that their neighbor's son is experimenting with his own kind of sexuality. The first book from the widely lauded Aidt to reach the English language, Baboon delivers audacious writing that careens toward bizarre, yet utterly truthful, realizations.

Originally from Greenland, Naja Marie Aidt is a Danish poet and author with nearly 20 works in various genres to her name. She has received numerous honors, including the Nordic nations' most prestigious literary prize, the Nordic Council's Literature Prize, in 2008 for Baboon, and her work has been translated into several languages. She has also been anthologized in the prestigious Best European Fiction series and has appeared in leading American journals of translation. She lives in Brooklyn, NY. Denise Newman is a translator and a poet who has published three collections of poetry. She has translated two books by Denmark's greatest modernist author, Inger Christensen, and her work has appeared widely, including in Denver Quarterly, Volt, Fence, New American Writing, and ZYZZYVA. She lives in San Francisco.
Loading...
or support indie stores by buying on