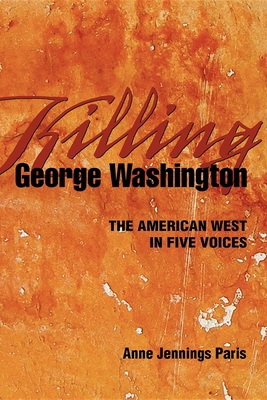 The American West in Five Voices

Killing George Washington tells the story of the American frontier as it moves west. Anne Jennings Paris, in a collection of narrative poems, imagines the voices of the forgotten historical figures of Lewis Wetzel, a notorious Indian killer; York, the slave who accompanied Lewis and Clark; Charity Lamb, Oregons first convicted murderess; Ing Hay, a Chinese immigrant who made a name for himself as a doctor; and Mary Colter, an architect who helped shaped the western landscape. Exploring the American consciousness, these poems question our shared heritage through the personal stories of legends.

“I became so deeply entranced with the beauty of the writing that I devoured it all. To my knowledge, no other writer has ever before so poignantly, so beautifully, so successfully captured the very power and essence of the American frontier and transferred it into both prose and poetry. One cannot read what Ms. Paris has written without being not only greatly moved by its strength and honesty, but equally touched and haunted by the pervasively compelling images she conjures. I consider this a master work of literary art.” —Allan W. Eckert, noted historian and author of That Dark and Bloody River, The Frontiersman, and Wild Season

Anne Jennings Paris has a BA in English Literature and an MFA in Creative Writing. Her poems have appeared in Zyzzyva, the Cimarron Review, and the Pomona Valley Review. She became interested in forgotten legends of the American frontier because she is a descendant of Lewis Wetzel. Anne lives in Oregon City, Oregon, with her husband and son. Killing George Washington is her first book.
Loading...
or
Not Currently Available for Direct Purchase