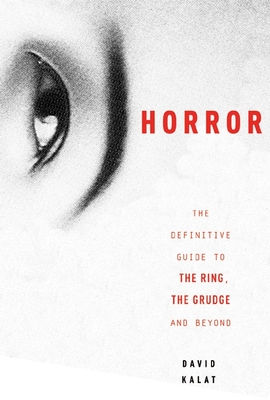 The Definitive Guide to The Ring, The Grudge and Beyond

Navigating the numerous versions released in the U.S. and Japan of The Ring, The Grudge, Tomie and other films and sorting out the finest output of legends like Takashi Miike is an intimidating task. J-Horror breaks down each and every franchise, from the narrative to the talent behind the screen and other trivia, for a greater understanding and appreciation of the genre. Learn about the influence Japanese folklore and ghost stories had on J-Horror, and the influence of J-Horror on American cinema. Just don't forget your copy on the way to the video store!

Praise For J-Horror: The Definitive Guide to The Ring, The Grudge and Beyond…

"David Kalat’s writing style is easy to follow and well-paced. With very little knowledge of or interest in horror films, I initially thought this was going to be a difficult read. I needn’t have worried..." - PopCultureShock

"The resulting critical eye and even handed explorations of the artistic, cultural, and economic context for works popularized by the explosion in interest in The Ring presents a convincing case for developing an respect for the aesthetic and the minds behind it. " - Ain't it cool News

"Thanks to Kalat, I know that I'll be haunting the video store, clutching my already crumpled, scribbled list." --Fangoria

"Kalat doesn't pander to fanboys here; he looks at the phenomenon of Japanese-style horror movies in an objective light. Highly recommended." --Popculture Shock

"Kalat's prose is a pleasure to read. A very detailed and balanced account warmly recommended to all film fans." --Japan Navigator

"A very rich and thorough treatment of the history, details, trends and people behind exemplar films of this genre. I can in fact wholly recommend this book to anyone even slightly interested." --SaruDama

David Kalat is the author of indispensable books on film and television history, including The Strange Case of Dr. Mabuse, Homicide: Life on the Streets: The Unofficial Companion and A Critical History and Filmography of Toho Godzilla Series. He regularly writes for Scarlet Street and Filmfax and is the president of the oldest independent DVD label in the industry, All Day Entertainment.
Loading...
or
Not Currently Available for Direct Purchase