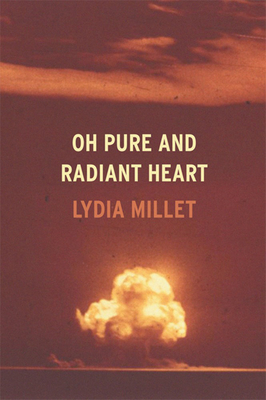 Oh Pure and Radiant Heart plucks the three scientists who were key to the invention of the atom bomb—Oppenheimer, Leo Szilard and Enrico Fermi—as they watch history's first mushroom cloud rise over the desert on July 16th, 1945...and places them down in modern-day Santa Fe. One by one, the scientists are spotted by a shy librarian who becomes convinced of their authenticity. Entranced, bewildered, overwhelmed by their significance as historical markers on the one hand, and their peculiar personalities on the other, she, to the dismay of her husband, devotes herself to them. Soon the scientists acquire a sugar daddy—a young pothead millionaire from Tokyo who bankrolls them. Heroes to some, lunatics or con artists to others, the scientists finally become messianic religious figureheads to fanatics, who believe Oppenheimer to be the Second Coming. As the ever-growing convoy traverses the country in a fleet of RV's on a pilgrimage to the UN, the scientists wrestle with the legacy of their invention and their growing celebrity, while Ann and her husband struggle with the strain on their marriage, a personal journey married to a history of thermonuclear weapons.

Lydia Millet has written more than a dozen novels and story collections, often about the ties between people and other animals and the crisis of extinction. Her story collection Fight No More received an Award of Merit from the American Academy of Arts and Letters in 2019, and her collection Love in Infant Monkeys was a finalist for the Pulitzer Prize in 2010. She also writes essays, opinion pieces and other ephemera and has worked as an editor and staff writer at the Center for Biological Diversity since 1999. She lives in the desert outside Tucson with her children and boyfriend.
Loading...
or support indie stores by buying on