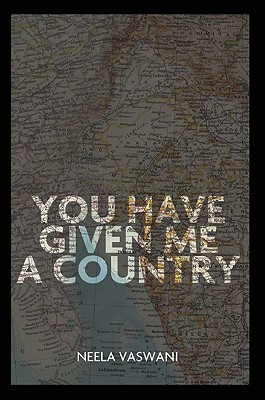 You Have Given Me a Country

"Vaswani is a confident writer whose unflinching eye shows the reader the beauty grounded in the mundane."San Francisco Chronicle

You Have Given Me a Country is an emotionally powerful exploration of blurred borders, identity, and what it means to be multicultural. Combining memoir, history, and fiction, the book follows the paths of the author's Irish-Catholic mother and Sindhi-Indian father on their journey toward each other and the biracial child they create. Neela Vaswani's second full-length work thematically echoes such books as The Color of Water, Running in the Family, or Motiba's Tatoos, but it is entirely unique in approach, voice, and story. The book reveals the self as a culmination of all that went before it, a brilliant new weave of two varied, yet ultimately universal backgrounds that spans continents, generations, languages, wars, and, at the center of it all, family.

Neela Vaswani is the author of the short story collection Where the Long Grass Bends (Sarabande Books, 2004). Recipient of a 2006 O. Henry Prize, her fiction and nonfiction have been widely anthologized and published in journals such as Epoch, Shenandoah, and Prairie Schooner. She lives in New York City.


Praise For You Have Given Me a Country…

Vaswani is author of Where the Long Grass Bends (Sarabande, 2004). Recipient of a 2006 O. Henry Prize, she holds a Ph.D. in American Cultural Studies from the University of Maryland. She lives in New York and teaches at Spalding University's brief-residency MFA Program. An education activist in India and the US, Vaswani is founder of the Storylines Project.
Loading...
or support indie stores by buying on