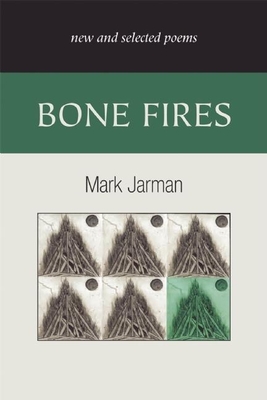 Jarman's] poems explore faith in its many manifestations, but there is something here transcendent that speaks to everyone. Highly recommended.--Library Journal

Bone Fires collects work from over thirty years and charts Mark Jarman's spiritual development as he grows from a poet of childhood and nostalgia through adulthood and the struggles of faith. The section of new poems includes work published in American Poetry Review, Georgia Review, The New Republic, Poetry, and in the yearly anthology Best American Poetry. A landmark collection from one of our nation's most distinguished poets.

This is precisely what a new-and-selected collection should be: a book better as well as bigger than any of those its contents are culled from. Confirming the poet’s intergrity and consistency, it attests an invaluably unique poetic personality.”
Ray Olson, Booklist (starred review)

Subdued and tender, almost without a false move, these pages (reminiscent of Carl Dennis) return to the scenes of his first work, the source of his strength. Readers who think they know Jarman all too well may find an enlightening surprise.”
Publishers Weekly

Following the development of Jarman’s poetry and his uncompromising vision of poetry-making as sacred work, our contributor, Michelle Boisseau, found herself amazed again and again at how the unaffected discipline of Jarman’s craft helps him plumb the reaches of human experience. One of the most moving and exhilarating experiences she had this year reading poetry.”
Kansas City Star

This volume of Mark Jarman’s selected poems represents more than thirty years of work and eight books of poetry. The collection offers a look at Jarman’s transition from writing focused on nostalgia and childhood to poems centered on faith and spirituality and the struggle inherent in those ideals.”
American Poet

The myriad gifts of this gathering of poems confirm that Jarman is one of America’s most distinct and important voices, and prove that it is possible to sustain an original style over a long career (in Jarman’s case, an understated, wry, perspicacious, darkly complicated and formal engagement with belief and unbelief) while avoiding self-parody of a falling off of vision.”
Lisa Russ Spaar, Image

Jarman’s spiritual questions intersect within fact, are inseparable fromhis profound regard for the natural world. . . . His just-released collection, Bone Fires: New and Selected Poems, includes recent poems that regard the confounding violence and beauty at the center of life.
Maria Browning, Chapter 16

I wish every congregation could have a Mark Jarman in its midst, because a poet’s tithe of attention and language is as valuable as the widow’s mite. Bone Fireswith its meditations on faith and doubt, hope and silence, and the sacred and desecrated fragments of God’s worldis a gift to the whole church and the whole creation.”
Katherine Willis Pershey, The Christian Century

"Jarman’s new poems are as good as any of his career. . . . Bone Fires serves well as an introduction to the poet’s work, but it must also be welcome to pre-existing Jarman fans. Although there are only 19 new poems, they tackle the full range of his obsessionsfaith, of course, but also family, history, and regret. At 58, Jarman is by no means at the end of his career, in spite of the common assumption that accompanies a book of selected works. This poet seems to anticipate this assumption and answers it in the opening poem, How My Sister, My Mother, and I Still Travel Down Balwearie Road,” which concludes, It is still cold, still dark, just as I said, and late. But not as late as I thought.”
Erica Wright, ForeWord Reviews

Bone Fires is an excellent representative collection of Jarman’s work, perfect for those who are longtime fans or reading him for the first time.”
New Pages

"Jarman, who teaches at Vanderbilt University, writes about family life, memory, grace, the night sky and other mysteries divine."
Ray Waddle, The Tennessean

Mark Jarman is the author of nine books of poetry: North Sea (1978), The Rote Walker (1981), Far and Away (1985), The Black Riviera (1990), Iris (1992), Questions for Ecclesiastes (1997), Unholy Sonnets (2000), To the Green Man (2004), and Epistles (2007). He has also published two collections of his prose, The Secret of Poetry (2000) and Body and Soul: Essays on Poetry (2001). Jarman is an elector of the American Poets' Corner at the Cathedral Church of Saint John the Divine in New York City. His awards include a Joseph Henry Jackson Award for his poetry, grants from the National Endowment for the Arts in poetry, and a John Simon Guggenheim Memorial Foundation fellowship in poetry. His book The Black Riviera won the 1991 Poets' Prize. Questions for Ecclesiastes won the 1998 Lenore Marshall Poetry prize from the Academy of American Poets and The Nation magazine. He is Centennial Professor of English at Vanderbilt University.
Loading...
or
Not Currently Available for Direct Purchase