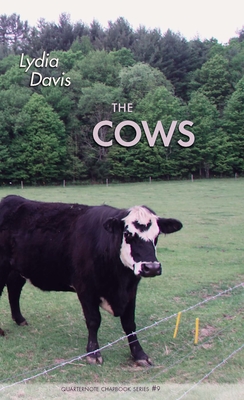 You read Lydia Davis to watch a writer patiently divide the space between epiphany and actual human beings by first halves, then quarters, then eighths, and then sixteenths, into infinity, says The Village Voice. Indeed, Lydia Davis is mathematician, philosopher, sculptor, jeweler, and scholar of the minute. Few writers map the process of thought as well as she, few perceive with such charged intelligence.

The Cows is a close study of the three much-loved cows that live across the road from her. The piece, written with understated humor and empathy, is a series of detailed observations of the cows on different days and in different positions, moods, and times of the day. It could be compared to some sections of Wallace Stevens' Thirteen Ways of Looking at a Blackbird or to Claude Monet's paintings of Rouen Cathedral.

Forms of play: head butting; mounting, either at the back or at the front; trotting away by yourself; trotting together; going off bucking and prancing by yourself; resting your head and chest on the ground until they notice and trot toward you; circling each other; taking the position for head-butting and then not doing it.

She moos toward the wooded hills behind her, and the sound comes back. She moos in a high falsetto before the note descends abruptly, or she moos in a falsetto that does not descend. It is a very small sound to come from such a large, dark animal.


Praise For The Cows (Quarternote Chapbook)…

By the end of the chapbook (it’s only 37 pages) the three cows have become five, echoing the cycles that occupy the center of this impressionistic work. It’s the most simple stuff, but by slowing down to take a look, day in and day out, Davis reminds us of the profundity of everythingeven creatures who do not know the words person,’ neighbor,’ watch,’ or even cow.’”
David L. Ulin, Los Angeles Times

She has translated Proust and Flaubert and published a 752-page short-story collection, but in this smaller project, Davis observes the movements of three cows that live across the road. Her pitch-perfect ear, eye for detail and the classical quietude of her prose allow us to see these creatures in a new light.”
Moe’s Books, San Francisco Chronicle

"This is Davis at her most playful, though, again, calmly and patiently. . . . Cows have their own apparel of momentary permanence, and capturing it is the ultimate exercise of Lydia Davis’s prose. Zeroed in, that everything about the cows seems inevitable and eternal."
David Bartone, The Rumpus

Lydia Davis: Lydia Davis, a 2003 MacArthur Fellow, is the author, most recently, of Collected Stories (Farrar, Straus & Giroux, 2009). She is also the latest translator of Swann's Way by Marcel Proust (Viking Penguin, 2002), and the forthcoming Madame Bovary by Gustave Flaubert (Viking Penguin, 2010). She lives in rural upstate New York, across the road from the cows she has studied with such attention, and teaches at SUNY Albany.
Loading...
or
Not Currently Available for Direct Purchase