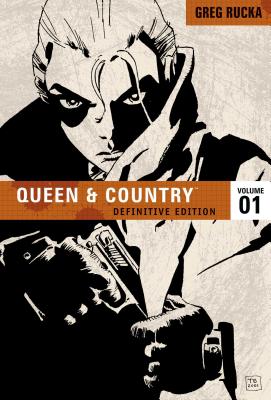 QUEEN & COUNTRY, the Eisner Award-winning and critically lauded espionage series from acclaimed novelist and comic book author Greg Rucka, is back in a new series of definitive editions collecting the entire classic series in just four affordable soft covers. In this first collection, readers are introduced to the thrilling and often-times devastating world of international espionage as SIS field agent Tara Chase is sent all over the world in service to her Queen & Country all the while Director of Operations Paul Crocker walks a narrow tightrope between his loyalty to his people and the political masters that must be served!

Brian Hurtt is an artist/writer who has spent most of his career working on collaborative creator-owned projects. His first such collaboration was in 2006 when Brian teamed with writer Cullen Bunn to create the Prohibition-era, monster-noir, cult classic, The Damned. A few years later the two teamed up again to create The Sixth Gun--a weird-west, epic supernatural fantasy. Spun out of that world, they're now collaborating on Shadow Roads. Brian also contributes to the popular webcomic Table Titans, in which he is the writer and artist of the stories "Whispers of Dragons" and "Road to Embers". Brian lives and works in St. Louis, Missouri. Brihurtt.com Twitter: @brihurtt
Loading...
or
Not Currently Available for Direct Purchase