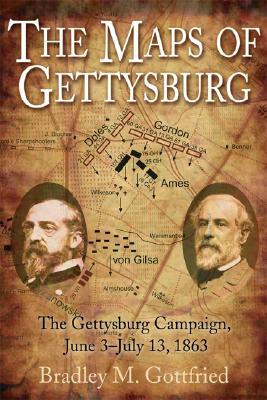 More academic and photographic accounts on the battle of Gettysburg exist than for all other battles of the Civil War combined--and for good reason. The three-days of maneuver, attack, and counterattack consisted of literally scores of encounters, from corps-size actions to small unit engagements. Despite all its coverage, Gettysburg remains one of the most complex and difficult to understand battles of the war. The Maps Gettysburg: The Gettysburg Campaign, June 3 - July 13, 1863, by Bradley Gottfried offers a unique approach to the study of this multifaceted engagement.

The Maps of Gettysburg plows new ground in the study of the campaign by breaking down the entire campaign in 140 detailed original maps. These cartographic originals bore down to the regimental level, and offer Civil Warriors a unique and fascinating approach to studying the always climactic battle of the war.

The Maps of Gettysburg offers thirty "action-sections" comprising the entire campaign. These include the march to and from the battlefield, and virtually every significant event in between. Gottfried's original maps (from two to as many as twenty) enrich each "action-section." Keyed to each piece of cartography is detailed text that includes hundreds of soldiers' quotes that make the Gettysburg story come alive. This presentation allows readers to easily and quickly find a map and text on virtually any portion of the campaign, from the cavalry drama at Brandy Station on June 9, to the last Confederate withdrawal of troops across the Potomac River on July 15, 1863. Serious students of the battle will appreciate the extensive and authoritative endnotes. They will also want to bring the book along on their trips to the battlefield.

Perfect for the easy chair or for stomping the hallowed ground of Gettysburg, The Maps of Gettysburg promises to be a seminal work that belongs on the bookshelf of every serious and casual student of the battle.

Bio: Bradley M. Gottfried holds a Ph.D. in Zoology from Miami University. He has worked in higher education for more than three decades as a faculty member and administrator. He is currently President of the College of Southern Maryland. An avid Civil War historian, Dr. Gottfried is the author of five books: The Battle of Gettysburg: A Guided Tour (1998); Stopping Pickett: The History of the Philadelphia Brigade (1999); Brigades of Gettysburg (2002); Roads to Gettysburg (2002); and Kearny's Own: The History of the First New Jersey Brigade (2005). He is currently working with Theodore P. Savas on a Gettysburg Campaign Encyclopedia.