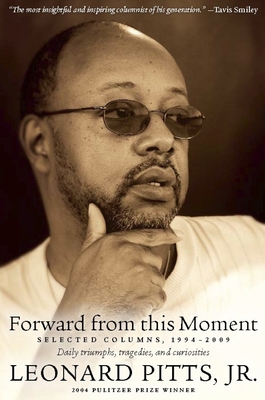 Forward from This Moment

Since 1976, when he was an 18-year-old junior at USC, Leonard Pitts' writing has been winning awards, including the Pulitzer and five National Headliner Awards. This book collects his best newspaper columns, along with select longer pieces. The book is arranged chronologically under three broad subject headings: "Waiting for Someday to Come," about children and family; "White Men Can't Jump (and Other Stupid Myths)," about race, gender, sexual orientation, religion, and other fault lines of American culture; and "Forward from this Moment," about life after the September 11 attacks, spirituality, American identity, and Britney Spears. Pitts has a readership in the multi-millions across the country, and his columns generate an average of 2500 email responses per week. His enthusiastic fans are certain to embrace this collection of the best of his newspaper and magazine work, published to coincide with the release of his first novel, Before I Forget. Forward from this Moment is an essential collection from one of America's most important voices.

The 2004 Pulitzer Prize for distinguished commentary was awarded to Leonard Pitts Jr. of The Miami Herald for his fresh, vibrant columns that spoke, with both passion and compassion, to ordinary people on often divisive issues.” —Pulitzer organization

"Leonard Pitts, Jr. is the most insightful and inspiring columnist of his generation." Tavis Smiley

"As a long-time reader and admirer, I find there is only one thing to question about Leonard Pitts being awarded the Pulitzer Prize: What took them so long?" Bob Costas

"He refuses to be predictable or to rest on his considerable laurels. He is funny when you think there's not a smidgen of humor to be found, enraged at the very moment we thought we no longer cared, and he shakes us up just when we're so certain we have it all figured out. In other words, he makes us better for having read him. What a gift. In sparse, often electric prose, Pitts challenges us to be bigger than we thought possible, and then shows us how to get there." Connie Schultz, Cleveland Plain-Dealer

"This is a book about black men and fatherhood. But it is also much more....Pitts writes with a sensitivity and an eloquence that illustrate how these problems transcend race and gender. A must-read for anyone who has ever had a father--or has not." Miami Herald

In sharing his own harrowing story and the stories of other men, too, in this poignant book, Leonard Pitts Jr., convinces us that we must reassume the distinguished role of father to reclaim our children and ourselves.” —Bill Cosby

Thoroughly absorbinga readable, well-balanced, impassioned account that touches not just the black family, but all who care about children.” —Kirkus Reviews