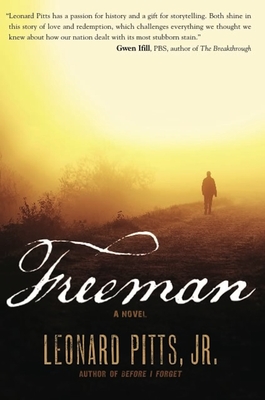 “As the Civil War ends, many broken lives await their own personal reconstruction. Pitts weaves together the stories of former slaves seeking family members from whom they were long separated, abolitionists opening a school to educate Southern blacks for a new life, and defeated, still angry Confederate soldiers. The characters are multi-dimensional and the historical detail is astonishingly accurate. Freeman is an engrossing, moving read and an original portrayal of a pivotal time in our nation's history.”
— Terri Weiner, Village Books, Bellingham, WA
View the List

“As the Civil War ends, many broken lives await their own personal reconstruction. Pitts weaves together the stories of former slaves seeking family members from whom they were long separated, abolitionists opening a school to educate Southern blacks for a new life, and defeated, still angry Confederate soldiers. The characters are multi-dimensional and the historical detail is astonishingly accurate. Freeman is an engrossing, moving read and an original portrayal of a pivotal time in our nation's history.”
— Terri Weiner, Village Books, Bellingham, WA
View the List

Freeman, the new novel by Leonard Pitts, Jr., takes place in the first few months following the Confederate surrender and the assassination of Abraham Lincoln. Upon learning of Lee's surrender, Sam--a runaway slave who once worked for the Union Army--decides to leave his safe haven in Philadelphia and set out on foot to return to the war-torn South. What compels him on this almost-suicidal course is the desire to find his wife, the mother of his only child, whom he and their son left behind 15 years earlier on the Mississippi farm to which they all belonged. At the same time, Sam's wife, Tilda, is being forced to walk at gunpoint with her owner and two of his other slaves from the charred remains of his Mississippi farm into Arkansas, in search of an undefined place that would still respect his entitlements as slaveowner and Confederate officer. The book's third main character, Prudence, is a fearless, headstrong white woman of means who leaves her Boston home for Buford, Mississippi, to start a school for the former bondsmen, and thus honor her father's dying wish. At bottom, Freeman is a love story--sweeping, generous, brutal, compassionate, patient--about the feelings people were determined to honor, despite the enormous constraints of the times. It is this aspect of the book that should ensure it a strong, vocal, core audience of African-American women, who will help propel its likely critical acclaim to a wider audience. At the same time, this book addresses several themes that are still hotly debated today, some 145 years after the official end of the Civil War. Like Cold Mountain, Freeman illuminates the times and places it describes from a fresh perspective, with stunning results. It has the potential to become a classic addition to the literature dealing with this period. Few other novels so powerfully capture the pathos and possibility of the era particularly as it reflects the ordeal of the black slaves grappling with the promise--and the terror--of their new status as free men and women.

"A uniquely American epic...Freeman is an important addition to the literature of slavery and the Civil War, by a knowledgeable, compassionate and relentlessly truthful writer determined to explore both enslavement in all its malignancy and also what it truly means to be free." Howard Frank Mosher, Washington Post

"Leonard Pitts has a passion for history and a gift for storytelling. Both shine in this story of love and redemption, which challenges everything we thought we knew about how our nation dealt with its most stubborn stain." Gwen Ifill, PBS, author of The Breakthrough

"Freeman is a myth of what’s humanly possible, a needed story about little-known heroism, and a shadow thrown forward to the struggles of American families in the 21st century." John Timpane, Philadelphia Inquirer

"Post-Civil War America is fertile ground for novelists, but few have tilled it with such grace and majesty as Leonard Pitts. In Freeman, Pitts weaves a beguiling, cinematic love story against a rich tapestry of American history, evoking unforgettable characters in a narrative that could easily replace a shelf of textbooks. What a splendid read!" Herb Boyd, co-editor of By Any Means NecessaryMalcolm X: Real, not Reinvented

"Leonard Pitts, Jr., who won a Pulitzer Prize for his searing Miami Herald columns, may well pick up that award again for Freeman...[Pitts] richly illuminates the interior lives of free and enslaved Black folks. He also delivers a sweeping romance that reaffirms the power of love even against the most horrific circumstances." Patrik Henry Bass, Essence magazine

"Rich in period details from the mundane to the most atrocious, the captivating story Pitts weaves is simplistic in its resonance but complex in its emotions. The characters and their growth, their fierce and stirring highs and lows, their battles with their own prejudices, make this novel unforgettable." Amy Canfield, Miami Herald

"The characters are multi-dimensional and the historical detail is astonishingly accurate. Freeman is an engrossing, moving read and an original portrayal of a pivotal time in our nation's history." IndieBound's Indie Next List for June, Terri Weiner, Village Books, Bellingham, Washington

"Leonard Pitts, Jr. crafts a novel as well as the great storytellers of our time. Freeman captured my attention from the very first sentence and my heart throughout. Sam and Tilda will stay with me for a very long time. I can't let them go." Sybil Wilkes, The Tom Joyner Morning Show

"Author Leonard Pitts, Jr. serves up a novel that's both ugly and beautiful, with characters that you'll feel honored to know...one of the finest Civil War novels I've ever read. If you promised yourself one decent book this summer, then look no further because this is it. Read three pages of Freeman and you'll know that this isn't a story you'll soon forget." Terri Schlichenmeyer, The Bookworm Sez

"Seamlessly, [Pitts] weaves together the fates of people in a way that is both incredible yet exactly how it should be...this book is an eye-opening commentary on devotion during this tangled chapter of American history." Wendi Thomas, Memphis Commercial Appeal

"I fell in love with Leonard Pitts Jr.'s fiction with Before I Forget. Now he's out with a new one, Freeman....It's a beautiful book, and I highly recommend it." Carleen Brice, White Readers Meet Black Authors blog

"An epic tale of love and war, this novel resonates with humanity’s depth of longing and hope in the most atrocious circumstances....Astounding for its portrayal of the vulnerability inherent in lost innocence and tragedy, Freeman is a beautiful story of redemption, compassion and love....I highly recommend this book. It will leave you craving more. It is simply astonishing." BookPeople's Blog, Austin, Texas

"This gripping and difficult novel remains a story of imperfect triumph for those former slaves and for the handful of whites who try to help them...[Pitts] keeps the reader hooked through outrage after outrage." Arlene McKanic, BookPage

"Pulitzer Prize-winning journalist Leonard Pitts, Jr. is a compelling storyteller and in Freeman he explores the meaning of freedom; he expresses a tone of sympathy for his characters troubles in this gripping tale about sacrifice and determination." Clarence Reynolds, The Network Journal

"It's the kind of book that you have to read, like stories of the Holocaust. Freeman reminds us of our humanity." Nancy Olson, owner of Quail Ridge Books, Raleigh, North Carolina

"Eye-opening...[Freeman] should give us insight into the capacity for love between men, women and children, separated by the institution of slavery." Charles E. Richardson, Macon Telegraph (Georgia)

"Leonard Pitts, Jr. is the most insightful and inspiring columnist of his generation." Tavis Smiley

"He refuses to be predictable or to rest on his considerable laurels. He is funny when you think there's not a smidgen of humor to be found, enraged at the very moment we thought we no longer cared, and he shakes us up just when we're so certain we have it all figured out. In other words, he makes us better for having read him. What a gift. In sparse, often electric prose, Pitts challenges us to be bigger than we thought possible, and then shows us how to get there." Connie Schultz, Cleveland Plain-Dealer

"As a long-time reader and admirer, I find there is only one thing to question about Leonard Pitts being awarded the Pulitzer Prize: What took them so long?" Bob Costas

Leonard Pitts, Jr. was born and raised in Southern California and now lives in suburban Washington, DC, with his wife and children. He is a columnist for the Miami Herald and won the 2004 Pulitzer Prize for commentary, in addition to many other awards. He is also the author of the novel Before I Forget (Agate Bolden, 2009); the collection Forward From this Moment: Selected Columns, 1994-2009, Daily Triumphs, Tragedies, and Curiosities (Agate Bolden, 2009); and Becoming Dad: Black Men and the Journey to Fatherhood (Agate Bolden, 2006).
Loading...
or support indie stores by buying on