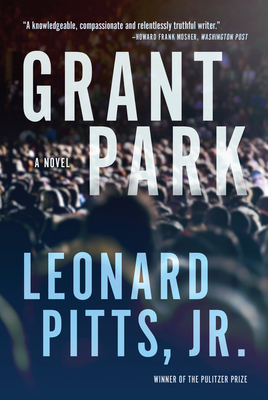 "A novel as significant as it is engrossing." --Booklist, starred review Grant Park is a page-turning and provocative look at black and white relations in contemporary America, blending the absurd and the poignant in a powerfully well-crafted narrative that showcases Pitts's gift for telling emotionally wrenching stories. Grant Park begins in 1968, with Martin Luther King's final days in Memphis. The story then moves to the eve of the 2008 election, and cuts between the two eras. Disillusioned columnist Malcolm Toussaint, fueled by yet another report of unarmed black men killed by police, hacks into his newspaper's server to post an incendiary column that had been rejected by his editors. Toussaint then disappears, and his longtime editor, Bob Carson, is summarily fired within hours of the column's publication. While a furious Carson tries to find Toussaint--while simultaneously dealing with the reappearance of a lost love from his days as a 60s activist--Toussaint is abducted by two white supremacists plotting to explode a bomb at Barack Obama's planned rally in Chicago's Grant Park. Toussaint and Carson are forced to remember the choices they made as young men, when both their lives were changed profoundly by their work in the civil rights movement.

Leonard Pitts, Jr. is a nationally syndicated columnist for the Miami Herald and winner of the 2004 Pulitzer Prize for commentary, in addition to many other awards. He is also the author of the novels Freeman (Agate Bolden, 2012) and Before I Forget (Agate Bolden, 2009); the collection Forward From this Moment: Selected Columns, 1994-2009, Daily Triumphs, Tragedies, and Curiosities (Agate Bolden, 2009); and Becoming Dad: Black Men and the Journey to Fatherhood (Agate Bolden, 2006). Born and raised in Southern California, Pitts now lives in suburban Washington, D.C., with his wife and children.
or
Not Currently Available for Direct Purchase