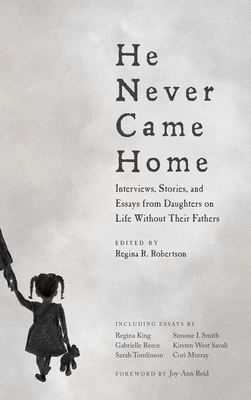 Interviews, Stories, and Essays from Daughters on Life Without Their Fathers

He Never Came Home is a collection of 22 personal essays written by girls and women who have been separated from their fathers by way of divorce, abandonment, or death. The contributors to this collection come from a wide range of different backgrounds in terms of race, socioeconomic status, religion, and geographic location. Their essays offer deep insights into the emotions related to losing one's father, including sadness, indifference, anger, acceptance--and everything in between. This book, edited by Essence magazine's West Coast editor Regina R. Robertson, is first and foremost an offering to young girls and women who have endured the loss of their fathers. But it also speaks to mothers who are raising girls without a father present, offering important perspective into their daughter's feelings and struggles. The essays in He Never Came Home are organized into three categories: Divorce, Distant, and Deceased. With essays by contributors such as Emmy Award-winning actress Regina King, fitness expert and New York Times best-selling author Gabby Reece, and television comedy writer Jenny Lee, this anthology illustrates the journey of the fatherless, and provides a space for these writers to express their pain, hope, and healing--minus any judgments and without apology.

Regina R. Robertson is the west coast editor for Essence magazine. Along with penning cover and feature stories (and the once-weekly online column View from the West), her work has appeared in such publications as O, The Oprah Magazine, the Associated Press, and The Root. She has also been quoted in the Los Angeles Times and appeared as a featured guest on NPR, The Real, Reelz, TVOne, and KTLA-TV. She lives in Los Angeles. Joy-Ann Reid is the host of the show AM Joy on MSNBC and a national correspondent appearing regularly on prime-time programs including Hardball with Chris Matthews and The Last Word with Lawrence O'Donnell. She formerly hosted the show The Reid Report on MSNBC. She served as the managing editor of TheGrio.com, has written columns for the New York Times, the Miami Herald, the Sun Sentinel, Salon, The Daily Beast, and the South Florida Times, and authored the book Fracture: Barack Obama, the Clintons, and the Racial Divide. She lives in New York City.
Loading...
or support indie stores by buying on