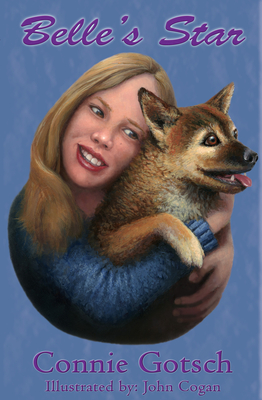 When Big Toby and his father, Bonehead throw Belle out of their truck at a convenience store, 12 year-old Darcy and her Auntie Ellen rescue the frightened puppy. They show Belle kindness and offer her a life with love and security. However Belle thinks no human is worth trusting. Darcy's family and their pets, including a cat, try to show Belle otherwise. Will she realize that though she cannot change her past, she can put it aside and build a future full of happiness? When Bonehead and Big Toby reappear and threaten Darcy, the girl's survival depends on the choice Belle makes.

Written in the first person from a dog's point of view, Belle's Star empowers young people who have escaped abuse and bullying to build new lives. Adventure and colorful characters help these children face painful issues, and find the strength to heal.

"The narrator in BELLE'S STAR is Belle, a smallish, reddish, farm dog bred to herd cattle and hence referred to as a ‘heeler.’ We learn right away, in this 125-page book written for children ages 10 through 12, that Belle is perceptive, curious, and nervous in new situations-which is to say that kids who buy the book will relate to her immediately. Moreover, she is an awesome storyteller, which is no less than one would expect from a creation of award-winning novelist like Connie Gotsch.

Belle was badly mistreated on the farm where her life began. When we meet her, the farmer and his nasty son are in the process of taking her for a one-way ride in their truck. They kick her out at a gas station and hope never to see her again. But she is rescued by a girl named Darcy and Darcy's aunt Ellen, who happen to be at the station and are witness to what the reader hopes will be Belle's final incident of abuse.

Belle is adorable, and the reader understands that her rescuers are bound to fall in love with her and try to help her out. The suspense comes from wondering whether or not Belle will decide to accept their help-or even recognize it as such. Having known nothing but bullying during her life on the farm, it will take more than a bath and a few doggie treats for Belle to learn to trust. And ultimately it will take an incident in which Darcy is threatened for Belle to learn her first lesson in loyalty.

Connie Gotsch has succeeded in creating a world from a dog's point of view. Buildings are ‘dens,’ rooms are ‘burrows,’ doorways are ‘holes,’ and people are described more often by their smell than how they look. Sounds and textures are also amplified. There are other dogs and even a cat in the story, and their friendly and sometimes foolish communication is reminiscent of the animals in the 1993 hit movie ‘Homeward Bound: The Incredible Journey.’

BELLE'S STAR is a page-turner, full of adventure and snappy dialogue and even a subplot concerning Darcy and her uncle. But it is also a book full of valuable lessons. Young (and older) readers will learn some good tips about how to treat animals, which is sure to come in handy especially for those who opt to adopt pets from shelters. But there are also some good tips about how people should treat one another. Great illustrations within and a beautiful painting of Darcy and Belle on the cover round out a wonderful reading experience." — Joan Schweighardt, Author of GUDRUN'S TAPESTRY

"Belle's Star by Connie Gotsch is a book about a dog who has gone through a lot in her puppy days. She was beaten, not well fed, and not loved until 12 year old Darcy rescues her. Luckily, Darcy and her Aunt Ellen have dogs that teach Belle how to be a normal dog. Overall, this book is great because it teaches you that dogs have feelings like all of us and to treat animals like we would like to be treated." — Amelia Mae, High Desert Dog Magazine

Connie Gotsch has published two award-winning adult novels, A Mouth Full of Shell and Snap Me a Future. A Mouth Full of Shell won the First Place Award for full-length fiction from the New Mexico Press Women's Communication Contest. She also wrote three short plays, A Peck of Dirt, Or Are You Cinderella--? and New Delight. In 2007 she received the New Mexico Press Women's Communicator of Achievement Award. She held an Ed.D in Leadership and Policy Studies with an emphasis on educational media from Northern Illinois University. Connie worked at KSJE, Public Radio for the Four Corners serving as Program Director, host of the award-winning morning classical music show, "Roving with the Arts", or producer of a segment for authors called "Write On Four Corners." In 2008, she received a Book in Hand Award from the New Mexico Book Association for her work in promoting New Mexico authors and publishers on the program. Connie passed away in July, 2012.

John Cogan did not became a painter by the usual approach. After earning a Ph.D. in atomic physics, John spent two years working in the field of geophysics before he made a detour and became a full-time painter. John relies on the physics of light and optics to better understand how to render the created world in pigments. His knowledge of geophysics is reflected in his love of painting the great rock formations and massive mountains of the western United States. While he occasionally uses oil paints when working “en plein air”, John prefers acrylics both for his studio paintings and most of his plein air work. It also gives him the bright colors he loves to use in his landscapes. As for subject matter, the Four Corners area is perfect. He uses a combination of field sketches and photographs for his studio works, but paints many of his smaller paintings on location. Although primarily interested in landscapes, he has painted other subjects, including still lifes, wildlife, and portraits. John’s work is carried by El Prado Galleries in Sedona, Arizona, Galleries West in Jackson, Wyoming, and Southwest Galleries in Dallas, Texas. He and his family make their home in New Mexico.