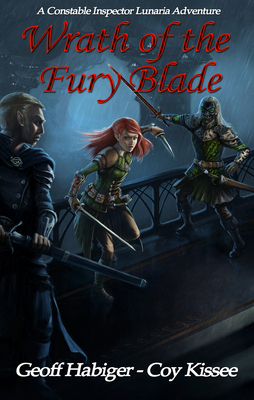 Wrath of the Fury Blade (A Constable Inspector Lunaria Adventure #1)

The brutal murder of Lavalé fey Avecath, the King's First Magistrate and advisor, interrupts Constable Inspector Reva Lunaria's day off. The victim's status makes this a high-profile investigation, bringing with it unwanted attention from Senior Inquisitor Ailan Malvaceä of the Sucra, the King's secret police. The manner of the victim's death makes this case even more intriguing. A body cut perfectly in half - from top to bottom - is a rare occurrence, even in a city filled with all manner of magic weapons. All of this would be challenging enough, but Inspector Lunaria must also deal with a new partner, Seeker Ansee Carya, who is clearly not up to her standards.

As Reva faces a growing body count, Senior Inquisitor Malvaceä undertakes his own mission to find the same killer, but with a very different agenda. Reva's investigation takes unexpected turns as wild conspiracies, hidden addictions, and Dark Elf soldiers all threaten to distract Reva from tracking down the killer. Reva's only hope of stopping the serial killer from cutting more prominent citizens of Tenyl in half is to figure out how to work with Seeker Carya and overcome her own weaknesses.

"A killer targets high-ranking victims in a society of elves obsessed with genetic purity.

On the world of Ados, in the elven city of Tenyl, Constable Inspector Reva Lunaria tries to enjoy her day off. She’s summoned, however, to the office of First Constable Aescel for an assignment to an important case. First Magistrate Lavalé fey Avecath has been murdered, cleaved clean in half one night in his study. With her longtime partner recently transferred, veteran Reva must work with the inexperienced Ansee Carya, who as a Seeker can investigate any magic used at the crime scene. At the First Magistrate’s study, the two encounter Green Cloaks—or the Sucra—who act as King Aeonis’ secret police. Inquisitor Ailan Malvaceä orders that all documents be collected from the study, which infuriates Reva. In turn, she graciously allows the Sucra to witness a Speaking, during which the corpse is magically induced to offer verbal clues about the murder. In this way, the investigators learn that a black blade committed the deed. At the scene of a second killing—this time Lady Tala Ochroma, the king’s treasurer—a healer refuses to save the life of a collaterally injured halpbloed (half-blood). Ansee loses his temper and strikes the elf, revealing the extent to which bigotry divides the citizens of Tenyl. In this marriage of fantasy and procedural thriller, the team of Habiger and Kissee (Unremarkable, 2018) gives fans of both genres a master class in worldbuilding. Everything from idioms (“But tread carefully, Inspector. You are on a narrow branch here”) to fascist racial doctrines mesh in a narrative that pulses with innovation on every page. While much of the emotional heft comes in comparing King Aeonis’ purity laws to those wielded by the Nazis, personal demons also haunt the characters in this series opener. Reva finds herself addicted to the stimulant Wake, and the halpbloed Cedres Vanda desperately wants to reunite with his family, despite his wife’s disgust for him. A wider conspiracy puts the kingdom at risk, and the charming, flawed protagonists prove themselves a winning combo worth visiting again.

This rich fusion of crime and fantasy should enchant readers." — Kirkus Reviews

"Lavalé had no time to move. He could only watch, helpless, as the blade, bright red lines twisting through it like a breathing forge, swept down upon his head. Lavalé's last thought was that he did know that blade."

"First, the magistrate is killed—brutally murdered in his own study by a familiar elven figure wielding a powerful black blade. Then the King's Treasurer is taken down in the middle of the road, along with anyone who happened to be too close in the moment. For Constable Inspector Reva Lunaria these murders mean one very important thing: She can kiss her well-earned day off goodbye. Along with her new partner, Ansee "Antsy" Carya, Reva sets out to uncover the masked murderer. As they investigate the murders, they uncover a web of intrigue and conspiracy that's been in motion for years. Magic blades, complex elven politics, murder, mayhem, and a talking parrot that won't stop saying "Reva is sexy"—all these things and more make Wrath of the Fury Blade a thrilling adventure from start to finish.

The idea may seem familiar: one murder leads to another while a no-nonsense inspector investigates the action and gets into danger as a result. However, this book is anything but typical. The action happens not in our world but in a fantasy world of elves and magic—a combination which may seem out of place. In the hands of the authors, though, Reva and her fantasy home come alive with every nuance of a real world. The novel is both a murder mystery and a police procedural that plays remarkably well with its fantasy elements—sort of like an episode of CSI penned by J.R.R. Tolkien. Every aspect of the world, from its history to its politics to its modern-day struggles, is thought out and presented in the pages for the reader to pick up on. Everything from the elven police procedure to the rules of magic is predetermined, with the authors clearly thinking everything through in great detail. Reva's home is imbued with such a richness and depth that it becomes difficult to remember the place does not and cannot exist.

Reva herself is a strong, fierce heroine who puts her service in the name of justice above all else. Through her partnership with the much mellower (but equally moral) Carya, she is fleshed out in all her elven glory. Despite the two making a remarkable—though mismatched—team, neither is without their flaws. And as they proceed towards their goals, the demons of their past and present rear their ugly heads. In fact, no character is extraneous, no matter how short their appearance in the story is, and each is driven by his or her own ambitions and fears. The writing is likewise descriptive but tight with no words wasted. Yet every passage tells readers more about the story, the people, the environment, and every other aspect of the world in question.

Intrigue and wonder fill the story, but underneath everything run darker, more relevant themes: race, culture, and the absurd, over-emphasized importance of social standing. The world Reva lives in has declared elves pure and worthy and casts any half-breeds into lowly positions in society for their bloodline alone. It is, in a way, a dystopia which reflects the vices of our own world. It's clear from the beginning that the assassin is seeking to right wrongs he believes were committed by the elite in the society. But what is truly happening in this world? What drives anyone to commit unspeakable crimes? Magic, revenge, or is it something more? Wrath of the Fury Blade is a masterful marriage of genres and a must-read for fantasy and thriller lovers alike.

"In Wrath of the Fury Blade (A Constable Inspector Lunaria Adventure) by Geoff Habiger and Coy Kissee, Constable Inspector Reva Lunaria from The Royal Tenyl Constabulary is trying to enjoy her day off when she is urgently summoned by her superior. First Magistrate Lavalé fey Avecath, the King’s foreign advisor, was gruesomely murdered. It’s a difficult task, especially when the Sucra - the King’s secret police and the Constabulary’s rival - is also working on the case. She also has to get used working with a new partner, Seeker Ansee Carya. When more prominent figures are killed in a short space of time, Reva and Ansee know they must act quickly to stop the murderer.

It’s a crime story in the elven world. The spells and magical items that the characters use are constant reminders that this tale is set in a fantasy realm, although focusing on a couple of police detectives trying to catch a killer while dealing with red tape, some conflict in the office, and addiction. The world-building has enough detail and specificity that makes it believable, particularly when the system, social issues and struggles reflect the ones we have in our society.

The plot is moderately paced in which the characters are given enough room and time to establish themselves for readers to relate to them. They also have enough time to interact with one another with good dialogue that is not laden with medieval language, something for which I’m most appreciative. These set a solid foundation and backstory that steadily build into the bigger events. The tenacious Reva is easily likable, despite her flaws, but I gravitated more towards Ansee Carya. His perseverance and sense of justice proved his worth as a Seeker and showed his strength of character. Overall, Wrath of the Fury Blade is an engaging crime fantasy read interspersed with conspiracies, a secret order, and suspenseful moments. I truly enjoyed it." — Readers' Favorite

Geoff Habiger was raised in the shadow of roaring lions and peacock calls in Manhattan...Kansas, not New York. (That's the Little Apple, not the Big Apple, for those of you playing along at home. And the wild animals came from living behind the city's zoo.) Growing up Geoff loved exploring the woods around his home, sneaking into the zoo (don't tell anybody), and playing baseball and Dungeons & Dragons. He and his best friend, Coy Kissee, would spend hours reading comics, playing all sorts of role-playing games, and talking about books and movies. Geoff stayed in Manhattan for college, getting a B.S. degree in Geology at Kansas State University (Go Cats!). He then attended gradual school in Bozeman, Montana where studied paleontology with Dr. Jack Horner, got to dig up dinosaurs in Montana, and worked to mold and cast dinosaur bones. While he didn't graduate, he had a lot of fun and did meet his future wife, so that worked out well. Geoff currently resides in the wilds of the Monzano mountains, east of Albuquerque, with his wife, son, and two cats. He is currently working on sequels to the novels already published.

Coy Kissee is an avid player of all types of card games, board games, and role-playing games. He took his love for gaming and turned it into a business and is a co-founder of Tangent Games. He is the author of several books for Dungeons & Dragons published by Tangent Games. Coy lives in Kansas with his wife. He is currently working on several new projects for Tangent Games and is co-authoring his first novel, Unremarkable.