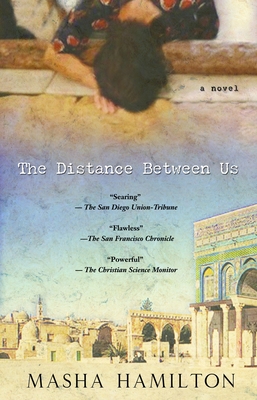 An authentic look at the emotional and ethical chaos within a war correspondent who becomes a bit too involved, Masha Hamilton's The Distance Between Us is a straight-ahead story of human passion--desire, conviction, and the guilt of a survivor--struggling for order within the frayed justice of the Middle East conflict. A seasoned journalist herself, Masha Hamilton brings to this revealing novel the sharp eye and deep empathy that marked her debut, Staircase of a Thousand Steps (BlueHen, 2001). Beautifully turned, and peopled with an astounding cast of characters who are as true as they are perceptive, The Distance Between Us is finally the portrait of one woman's search for the narrow pass between vengeance and emotional survival, when her only true attachment has been torn away from her. "If we knew where we were going to fall," the novel's most enigmatic character tells her, "we could spread straw."