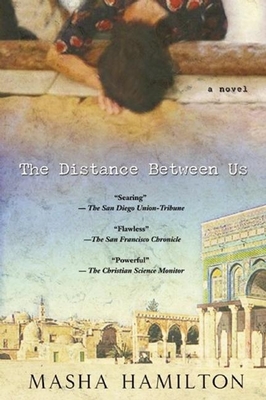 Caddie Blair feels everything strongly--and so she works hard to keep her distance. It's the ethical thing for a journalist to do, especially in a war-torn region like the Middle East. And Caddie wants to believe that nothing is as important as covering "the story." There's room for passion in her life--but that's only physical. And Caddie keeps even those fleeting attachments under wraps, secretive, because she knows that when a journalist even appears to lose her detachment, she is already lost. So what is Caddie to feel when her lover dies beside her--shot in an ambush on the way to the next promising political interview, across the Israeli border into Lebanon? An authentic look at the emotional and ethical chaos within a war correspondent who becomes a bit too involved, Masha Hamilton's The Distance Between Us is a straight-ahead story of human passion--desire, conviction, and the guilt of a survivor--struggling for order within the frayed justice of the Middle East conflict. A seasoned journalist herself, Masha Hamilton brings to this revealing novel the sharp eye and deep empathy that marked her debut, Staircase of a Thousand Steps (BlueHen, 2001). Beautifully turned, and peopled with an astounding cast of characters who are as true as they are perceptive, The Distance Between Us is finally the portrait of one woman's search for the narrow pass between vengeance and emotional survival, when her only true attachment has been torn away from her. "If we knew where we were going to fall," the novel's most enigmatic character tells her, "we could spread straw."

What are some of the historical and cultural differences that create distance between the Palestinians and the Jews in this story? How does creating distance influence Caddie’s relationship with Marcus? her professional colleagues? her friends? her community? herself?

In an instant, Caddie loses the two elements of her life most dear to her: Marcus and her professional detachment. How has reporting about violence in the past affected her?

After Marcus’s death, Caddie finds herself drawn closer and closer to dangerous situations. What drives this reckless behavior? What other professions encourage similar forms of escape?

What is behind Caddie’s strong attraction to Goronsky?

Lingering thoughts of revenge plague Caddie. Did you expect this?

The female characters in this novel—including Ya’el, Sarah, Halima, Anya—are diverse women who represent many cultures and values. How does each affect Caddie’s actions and influence her decisions?

Memories of Marcus’s death haunt Caddie. Is she in any way respon­sible for his death, or is she struggling with her own guilt for surviv­ing the ambush? How does Marcus’s journal—and perhaps his death—help her to heal?

Sarah tells Caddie, “Two kinds of people find their way to this place. Those who leave, and those who stay.” Does Caddie’s decision surprise you? How do her personal and professional losses reshape her life?

This fictional account of violence in the Middle East parallels many real-life, contemporary scenarios, both at home and abroad (for ex­ample, the war in Iraq, September 11, Columbine High School, Kosovo, Sarajevo, and Sudan). What motivates the kind of coverage given to these events? Is the reporting informative or voyeuristic?

This book is dedicated to Kevin Carter, a photojournalist who won a Pulitzer Prize for his disturbing photo of the famine in Sudan. In the picture, a gaunt Sudanese child crouches low to the ground while a vulture lurks nearby. Not long after winning the Pulitzer, Carter took his life. As a strict observer, journalists sometimes may have to let violence and brutality occur because if they become involved, they may change the outcome of the event or the public’s understanding of a situation. Are there situations when a journalist should become a participant or is it better to remain an observer?