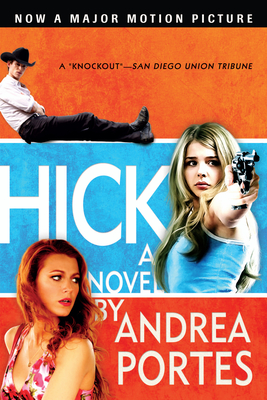 This fall, the film festival circuit will be introduced to the indomitable Luli McMullen in Hick, the new film made from the acclaimed novel by Andrea Portes, who also adapted the screenplay. The film--directed by Derick Martini--stars Chlo Grace Moretz, Blake Lively and Eddie Redmayne and features Rory Culkin, Anson Mount, Juliette Lewis and Alec Baldwin in supporting roles. Hick is the story of Luli (Moretz), a bright kid from a hick town who's had enough and strikes out on her own with some "borrowed" cash, a .45 and her wits. On the road, Luli is taken under the wing of a glamorous young grifter named Glenda (Lively), who has experienced worlds barely imaginable to Luli. As the two make their way across the American landscape, they encounter a captivating and dangerous young man named Eddie Kreezer (Redmayne), a disturbing criminal subculture, and some hard truths about what it means to be a young woman on the run, grasping at a future. Hick the movie is produced by Lighthouse Entertainment and Taylor Lane Productions, with Stone River Productions serving as executive producer. Though its first-person narrating voice is fast-paced, powerful and unquestionably authentic, Hick is a debut novel. Beyond this voice, what makes the book so extraordinary is that, although all of the worst things imaginable do befall this 13-year-old girl, she is never defeated by them. Luli always fights back; she always resurfaces. Set as a coming-of-age novel, Hick tracks the real perils that modern teenagers so often face. And it does so with bright wit, energy, and an indomitable spirit. This is a book that will grab the reader from the first page and not let go. And it is written by a woman who is becoming a cultural force in the hippest parts of Los Angeles.

How did you react, overall, to this novel? To the characters? To what happens to Luli?

Did you find the events of the novel and Luli’s reaction to them believable? If so why? If not, why not? If someone were to say to you that this novel “lives in the voice of Luli,” what do you think they might mean by that?

Did you find the book funny? If so, how would you describe the humor in it? If not, why not?

How would you describe the tone of the novel?

What are some of the themes you can identify in the novel? What elements of the novel lead you to identify those themes?

How would you describe Luli to someone? Why?

How realistic or well rounded did you find the characters in the novel? Are there parts of the story that make you feel sympathetic towards Tammy and Nick? If so, what are they? What do they add to the over all richness, or not, of the narrative?

How would you describe the author’s apparent point of view about why people act the way they do in this world? Do you agree with her, or find it convincing? If so, why? If not, why not?

How do you interpret the ending, or the resolution of the novel? What are your feelings about Luli and her future? What led you to your conclusions?