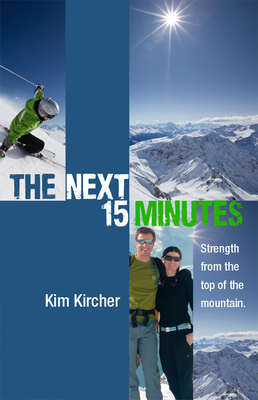 The Next 15 Minutes (Paperback)

Strength from the Top of the Mountain

Kim Kircher's husband's illness wasn't something she could blow up as she had done countless times on the ski slopes during avalanche control. Instead, Kim faced the biggest double black diamond ski run of her life as she listened to the doctors put her husband on the transplant list while he fought bile duct cancer.

"The Next 15 Minutes "is Kim's high octane story of how she drew strength from her life among the ski slopes and of the daring world that showed her how to survive and fight back.

Kim Kircher has been an EMT with avalanche control at Crystal Mountain, Washington, for twenty years.
The NAJSA (North American Snowsports Journalism Association) honored Kim Kircher at their Annual Conference in Mammoth Mountain with The Harold Hirsch Award in the Book Category for excellence in journalism. The book category is only given every three years. Judges are chosen based on their expertise in the field, and are not members of the organization. The award is named for Harold Hirsch, a long-time ski journalist, and member of the NASJA Board.

Kim Kircher has logged over six hundred hours of explosives control, earning not only her avalanche blaster's card, but also a heli-blaster endorsement, allowing her to fly over the slopes in a helicopter and drop bombs from the open cockpit, while uttering the fabulously thrilling words "bombs away" into the mic.

An Emergency Medical Technician, she has received both a National Ski Patrol Purple Merit Star for saving a life as well as a Green Merit Star for saving a life in arduous conditions. Before working in the ski industry, she received her BA and teaching certificate from the University of Washington, and taught high school English for five years. Her articles have appeared in River Explorer, Couloir Magazine and Off-Piste Magazine.

She is a current member of the Pacific Northwest Writer's Association and co-authors a blog about her job at Crystal Mountain Ski Area. Kim starred in a reality show about ski patrollers on the cable channel TRU-TV. Her husband's family owns and operates ten ski areas in the United States and Canada, including Crystal Mountain, where she was worked for twenty years.
or support indie stores by buying on
Copyright © 2020 American Booksellers Association