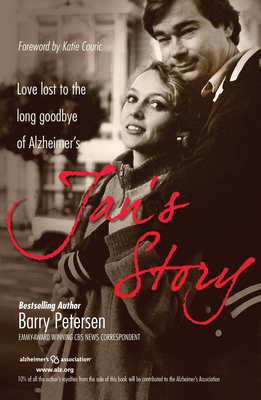 Love Lost to the Long Goodbye of Alzheimer's

When CBS News Correspondent Barry Petersen married the love of his life twenty-five years ago, he never thought his vow, "until death do us part," would have an expiration date. But Early Onset Alzheimer's claimed Jan Petersen, Barry's beautiful wife, at 55, leaving her unable to remember Barry or their life together.

Multiple Emmy-Award-winner Barry Petersen has covered wars, genocide, interviewed dozens of stars, and several Bosnian War Crimes Tribunal suspects. Barry earned one of his Emmys for reporting the Siege of Sarajevo for CBS Sunday Morning. He shared both Peabody and DuPont Awards for being a part of the CBS News Radio coverage of the Tiananmen Square uprising in 1989, and an Edward R. Murrow award for, of all things, sports writing for a story on baseball coming to Beijing. One report he could have never prepared himself for, however, is when his wife, Jan, was diagnosed with Early Onset Alzheimer's at the age of 55. Barry works for CBS News and makes his home in Denver, Colorado, where he wrote Jan's Story. His website: http: //www.barrypetersen.com/index.htm