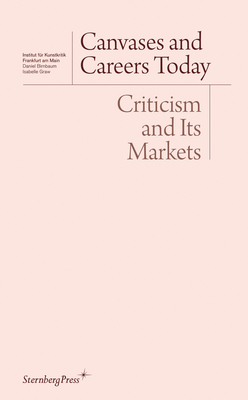 Canvases and Careers Today brings together contributions from the eponymous conference organized by the Institut für Kunstkritik, Frankfurt am Main. Its goal is to provide deeper insights and more complexity to current debates on the relationship between criticism, art, and the market.

“It was especially interesting for us to watch a kind of transatlantic divide happening. While the US-American participants mostly declared criticism as obsolete while hoping for turning its weakness into a strength, most European participants departed from the opposite diagnosis: that criticism has never been as strong as it is today, since it is now part of a knowledge-based economy.”—Isabelle Graw/Daniel Birnbaum

Daniel Birnbaum is a Swedish art critic, theoretician, and curator. He was the director of the Museum of Modern Art (Moderna Museet) in Stockholm from 2010 to 2018, and currently directs the VR company, Acute Art.

George Baker is Professor of Art History at the University of California, Los Angeles, and an editor at October magazine and October Books. He is the editor of James Coleman (MIT Press) and a frequent contributor to Artforum.

André Rottmann is a Research Fellow and Lecturer in the Department of Art History at Freie Universität, Berlin.

Johanna Burton is Keith Haring Director and Curator of Education and Public Engagement at the New Museum in New York and the series editor for the Critical Anthologies in Art and Culture.

Branden W. Joseph is Frank Gallipoli Professor of Modern and Contemporary Art in the Department of Art History and Archaeology at Columbia University and an editor of the journal Grey Room (MIT Press).

Tom Holert is a writer and curator. In 2015 he cofounded the Harun Farocki Institut in Berlin, a platform for research and production based on and departing from Farocki's example. With Anselm Franke he curated the 2018 exhibition Neolithic Childhood: Art in a False Present, c. 1930, at Haus der Kulturen der Welt, Berlin.

Isabelle Graw (Frankfurt am Main/Berlin) is Professor of Art Theory and Art History at the Staatliche Hochschule für bildende Künste–Städelschule, Frankfurt am Main. In 1990 Graw and Stefan Germer founded the quarterly magazine Texte zur Kunst. In 2003, Graw and Daniel Birnbaum founded the Institut für Kunstkritik at the Städelschule.
Loading...
or
Not Currently Available for Direct Purchase