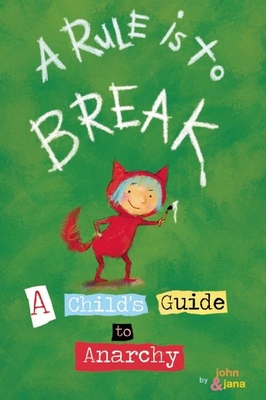 A Rule Is to Break

A Rule Is To Break says: Go ahead and throw your best self a party So glad it exists.--Kristin Hersh, Throwing Muses

After encountering the lively little anarchist in John and Jana's delightful A Rule is To Break, I will always remember the playful little devil with a mind of her own. A children's book on anarchy seems somehow just right: an instinctive, intuitive sense of fairness, community, and interdependence sits naturally enough with a desire for participatory democracy, self-determination, and peace and global justice.--Bill Ayers, author of To Teach: The Journey in Comics and Fugitive Days

Simply celebrating childhood: the joy, the wonder of discovery, the spontaneity, and strong emotions. . . . Wild Child is free to do as she pleases. A Rule Is To Break: A Child's Guide to Anarchy follows Wild Child as she learns about just being herself and how that translates into kid autonomy. It presents the ideas of challenging societal expectations and tradition and expressing yourself freely in kid-terms that are both funny and thought provoking--it even functions as a guidebook for adults to understand what it is to be a critically thinking, creative individual. Wild Child is the role model for disobedience that is sometimes civil.

John and Jana found success in comics with their book Very Vicky. In 2003, their illustrated family travelogue, Four Go Mad in Massachusetts, was published by Commonwealth Editions. Most recently, John and Jana collaborated on two picture books, Happy, Sad, Silly, Mad: My World Makes Me Feel (Andrews McMeel, 2009), and The Ocean Story (Picture Windows, 2011), which won Creative Child magazine's 2011 Creative Child Award Seal of Excellence and was short-listed for the 2012 Green Earth Book Award. A board book for the under-five crowd, A Year With Friends, is forthcoming from Abrams in 2012.
Loading...
or support indie stores by buying on