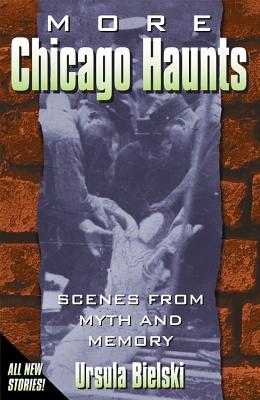 Scenes from Myth and Memory

Chicago. A town with a past. A people haunted by its history in more ways than one. A "windy city" with tales to tell... Critics called Ursula Bielski's Chicago Haunts: Ghostlore of the Windy City a "must-read," "a masterpiece of the genre," and "an absolutely first-rate book," and readers agreed. Now she s back with more history, more legends, and more hauntings, including the personal scary stories of Chicago Haunts readers. More Chicago Haunts brings you the Ovaltine factory haunts, the Monster of 63rd Street's castle of terror, phantom blueberry muffins, the ghosts of Wrigley Field, Al Capone's yacht, and 45 other glimpses into the haunted myths and memories of Chicagoland.

Ursula Bielski grew up in a haunted house on Chicago's north side. At an early age she became a believer in paranormal experiences, from the curse of the Chicago Cubs at nearby Wrigley Field to the hauntings at local Graceland Cemetery by a 19th century ghost girl. Underscoring these neighborhood folk tales were accounts by her police officer father of personal encounters with Big Foot and no less than the Devil himself.As an undergraduate at Benedictine University, Bielski was able to explore the interplay of belief and experience, focusing her coursework on the relationship between science and religion. Outside the classroom she tagged along with psychology students investigating reported cases of haunting phenomena which took her to such notorious sites as the Country House Restaurant in suburban Clarendon Hills; Chicago's Red Lion Pub; and the Oshkosh Opera House (Wisconsin). Her fascination with the methodology and philosophy of psi research led her to more structured work in the field of parapsychology.As a graduate student at Northeastern Illinois University, Bielski explored related aspects of American intellectual and cultural history, particularly the spiritualist movement of the 19th century and its transformation into psychical research and parapsychology. As a student affiliate of the Parapsychological Association, an international body dedicated to psi research, Bielski was a frequent contributor to the group's bulletin.Intrigued by the apparent relationship between folklore and paranormal experience, Bielski eventually turned her interests toward her hometown, penning her acclaimed and widely successful book, Chicago Haunts: Ghostlore of the Windy City. After several printings of the book and the release of a second edition, Bielski now lectures regularly on the subject, having emerged as an expert on Chicago's spiritual netherworld. In 1999, she teamed up with cemetery photographer Matt Hucke to write Graveyards of Chicago: The People, History, Art, and Lore of Cook County Cemeteries.Bielski is editor of PA News, the quarterly bulletin of the Parapsychology Association. She is currently at work on a children's cookbook inspired by the gothic novels of John Bellairs. She lives in Chicago with her husband, author David Cowan, and their daughter.
Loading...
or support indie stores by buying on