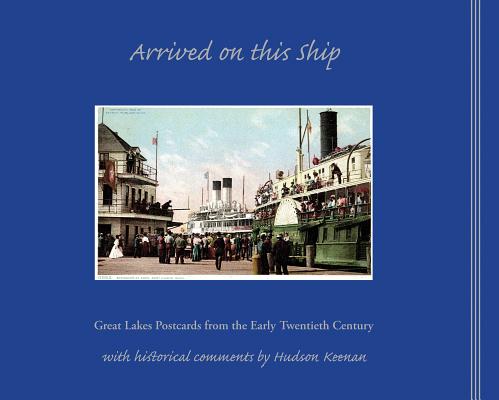 Arrived on This Ship

Arrived on this Ship is about travel on the Great Lakes one hundred years ago. It is an album of ship postal cards from the first two decades of the twentieth century. More than just an album, author Hudson Keenan has written about historical events, technology of the day, and life styles as each individual card suggests. Ship views are divided by the types of vessels and travel locations on the Lakes. All five Great Lakes are represented with postcards from Canada and the United States. Keenan has included comments on card publishers and a special section on the US Marine Postal Service. Maps of the Great Lakes enable one to locate the general vicinity of each view. Original standard 3½ by 5½ inch postcards from the authors collection were used for the reproductions in this book.

A native of Michigan with special interest in the Great Lakes, Hudson Keenan is a graduate of Central Michigan University and Michigan State University. He served in the US Army as a Terrain Analyst in Europe. On completion of service, he taught high school science for thirty-five years. Keenan began collecting Great Lakes ship postcards over twenty-five years ago. The growing collection spurred his interest in Great Lakes history. Now in retirement, Keenan has drawn together portions of his collection into this book. He has authored a number of articles for historical journals, mostly on roads and railroads. In 1999 he published a book Storms & Other Extreme Weather Events in Central Michigan.
Loading...
or
Not Currently Available for Direct Purchase