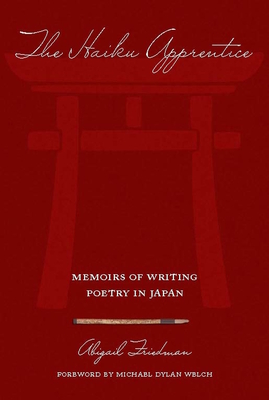 Memoirs of Writing Poetry in Japan

The problem came to a head one day as I was driving through Tokyo. While waiting for the light to change, I saw the following public service announcement on the side of a bus: Omoiyari hitonikurumani konomachini (Sympathy / toward people, toward cars / toward this town). Seventeen syllables. Five-seven-five format. It must be a haiku, I thought. But when I reached the office and repeated the announcement to my Japanese coworkers, none of them thought it was a haiku. I knew they were thinking to themselves, What kind of a lunatic is she? One tried to break the news to me gently, It's not a haiku, it's an advertising jingle. Well, I knew it was an advertising jingle, but still, wasn't it an advertising jingle haiku?--From The Haiku Apprentice

Abigail Friedman was an American diplomat in Tokyo, not a writer. A chance encounter leads her to a haiku group, where she discovers poetry that anyone can enjoy writing. Her teacher and fellow haiku group members instruct her in seasonal flora and fauna, and gradually she learns to describe the world in plain words, becoming one of the millions in Japan who lead a haiku life. This is the author's story of her literary and cultural voyage, and more: it is an invitation to readers to form their own neighborhood haiku groups and, like her, learn to see the world anew.

...A deft and seamless merging of genres: at once memoir, travel literature, and an unpretentious guide onto the terrain of Japanese poetry. It will appeal not just to poetry lovers, but to all readers who are curious about the world beyond their own borders. -- Foreword Magazine

Friedman is an appealing guide through an alternate Japan where modern people make poems about teacups and temples but also about skyscrapers and kidney surgery. -- East Bay Express

The book is not designed to make the reader a poet, but it does, perhaps, help us to pay more attention to our poetical eye. -- BiblioBuffet

The Haiku Apprentice gives the reader an original, thoughtful and personal glimpse of one expat's productive encounter with Japan. -- Metropolis

...Notable for its frankness and enthusiasm...Friedman has made a lively narrative out of the things she learned... -- The Japan Times

Abigail Friedman joined the Foreign Service in 1988 and served her country in Washington, Paris, Tokyo, the Azores and most recently as Consul General in Quebec City. She is a member of the Haiku Society of America and Haiku Canada. She is a founding member of the bilingual (French/English) Quebec Haiku Group in Quebec City. Michael Dylan Welch is a poet, editor, and publisher. More than 2.5K of his poems have appeared in hundreds of magazines in ten languages. He is president of the Tanka Society of America (which he founded in 2000), vice president of the Haiku Society of America, and vice president of the Eastside Writers Association.
Loading...
or support indie stores by buying on