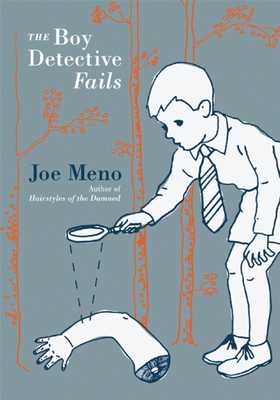 In the twilight of a mysterious childhood full of wonder, Billy Argo, boy detective, is brokenhearted to find that his younger sister and crime-solving partner, Caroline, has committed suicide. Ten years later, Billy, age thirty, returns from an extended stay at St. Vitus' Hospital for the Mentally Ill to discover the world full of unimagi-nable strangeness: office buildings vanish without reason, small animals turn up without their heads, and cruel villains ride city buses to complete their evil schemes. Lost within this unwelcoming place, Billy finds the companionship of two lonely, extraordinary children, Effie and Gus Mumford--one a science fair genius, the other a charming, silent bully. With a nearly forgotten bravery, Billy treads from the unendurable boredom of a telemarketing job, stumbles into the awkward beauty of a desperate pickpocket named Penny Maple, and confronts the nearly impossible solution to the mystery of his sister's death. Along a path laden with hidden clues and codes that dare the reader to help Billy decipher the mysteries he encounters, the boy detective may learn the greatest secret of all: the necessity of the unknown. Kirkus Reviews, June 15, 2006
*STARRED REVIEW*
What happens when a Hardy Boy grows up?
Mood is everything here, and Meno tunes it like a master, even though such a task initially appears impossible. Billy Argo, resident boy detective of his small New Jersey burg, seems to have inherited the aura of brains, fearlessness and rigid moral compass that always served the likes of Encyclopedia Brown in such good stead. Billy solves crimes and foils villains without breaking a sweat, aided by younger sister Caroline and heavyset friend Fenton. Their successes are trumpeted in newspaper headlines straight out of kids' adventure books ('Boy Detective Solves Fatal Orphanage Arson'), prompting suspicions that what the author has in mind is a long and ironic riff on children's fiction. But the book takes a dark turn as the years pass. Billy continues solving crimes and generally being a prodigy ('College Now For Boy Detective'), but Caroline slips into depression and ultimately commits suicide. Her brother winds up in an asylum as a result, not re-entering the world until he's 30. This is the point at which Meno, a tricky postmodernist who likes to embed separate story capsules on blank pages and leave nonsense words in the margins, might be expected to throw the curtain back, showing that our hero was crazy all along, no crimes were solved and his whole life was a lie. Instead, the author gives Billy a gallery of rogues to combat and even sends him to investigate the Convocation of Evil at a local hotel ('Featured Panel: To Wear a Mask?'). Meno sets himself a complicated task, marooning his straight-arrow, pulp-fiction protagonist in a world uglier than the Bobbsey Twins ever faced but refusing to go for satire. Instead, the author takes his compulsive investigator at face value. A full-tilt collision of wish-fulfillment and unrequited desires that's thrilling, yet almost unbearably sad. BOOKLIST, July 2006
*STARRED REVIEW*
Comedic, imaginative, empathic, and romantic, Meno, whose diverse works of fiction include Hairstyles of the Damned (2004) and Bluebirds Used to Croon in the Choir (2005), is particularly attuned to the intensity of childhood and its lifelong resonance. In this cartoony and dreamlike novel, Billy Argo of Gotham, New Jersey, receives a True-Life Junior Detective Kit for his tenth birthday, and in no time, the gifted boy detective becomes front-page news as he thwarts comic-book villains with the help of his younger sister, Caroline. But Caroline commits suicide,

Joe Meno is the best-selling author of the novels Hairstyles of the Damned, The Boy Detective Fails, How the Hula Girl Sings, and Tender As Hellfire. He was the winner of the 2003 Nelson Algren Award for short fiction and is a professor of creative writing at Columbia College Chicago.
Loading...
or support indie stores by buying on