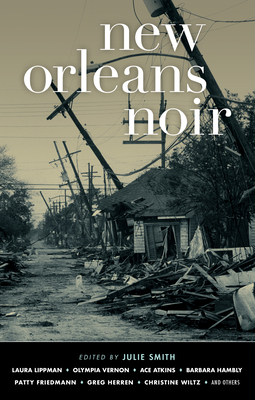 New Orleans Noir explores the dark corners of our city in eighteen stories, set both pre- and post-Katrina...In Julie Smith, Temple found a perfect editor for the New Orleans volume, for she is one who knows and loves the city and its writers and knows how to bring out the best in both...It's harrowing reading, to be sure, but it's pure page-turning pleasure, too.
--Times-Picayune New Orleans Noir is a vivid series of impressions of the city in moments that brought out either the best or worst in people. As part of the first wave of fiction to arrive in the wake of the storm, it's a thrilling read and a harbinger of what should be an interesting stream of works.
--Gambit Weekly Don't expect the New Orleans Chamber of Commerce to put its seal of approval on New Orleans Noir, because these eighteen stories describe a city where serial killers and philosophers live side by side...Yet when you've waded through these anguished pages, you can begin to understand why--as corrupt as it is, as broken as it is--so many of New Orleans's refugees still long to go home.
--Mystery Scene The excellent twelfth entry in Akashic's city-specific noir series illustrates the diversity of the chosen locale...Appropriately, Smith divides the book into pre- and post- Katrina sections, and many of the more powerful tales describe the disaster's hellish aftermath.
--Publishers Weekly Alongside San Francisco and Las Vegas, few American cities are simultaneously beloved and loathed by so many, which makes New Orleans a particularly promising and logical addition to Akashic's noir series...this is a strong and extremely entertaining collection that leaves you satisfied in a straight-up-Jameson, unfiltered-cigarette, pretty-gal-on-the-arm kind of way.
--L. Magazine New Orleans Noir digs below the surface and into the social fabric of a city that had its troubles long before Hurricane Katrina...Despite the fact that this collection is gritty, often bloody and frequently depressing, it's a fascinating portrayal of a city that has always had social troubles ignored by the rest of the country. In that it is a call to action.
--Feminist Review Akashic Books continues its groundbreaking series of original noir anthologies, launched in 2004 with Brooklyn Noir. Each story is set in a distinct neighborhood or location within the city of the book. Brand-new stories by: Ace Atkins, Laura Lippman, Patty Friedmann, Barbara Hambly, Tim McLoughlin, Olympia Vernon, David Fulmer, Jervey Tervalon, James Nolan, Kalamu ya Salaam, Maureen Tan, Thomas Adcock, Jeri Cain Rossi, Christine Wiltz, Greg Herren, Julie Smith, Eric Overmyer, and Ted O'Brien.

Julie Smith is the author of two detective series set in New Orleans, and an Edgar Award winner. A former reporter for the New Orleans Times-Picayune and the San Francisco Chronicle, she lives in the Faubourg Marigny section of New Orleans, which is much funkier than it sounds like.
Loading...
or support indie stores by buying on