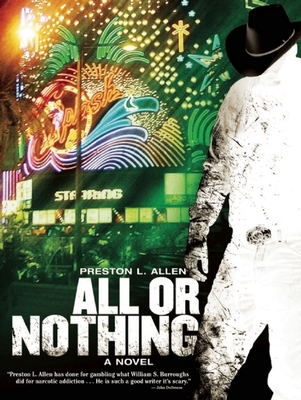 All or Nothing (Paperback)

Preston L. Allen's witty, charming, and very likable school bus driver--named P--is a desperate gambler. He has blown the hundred thousand dollars he won at the casino six months ago, but his wife and family still think he's loaded. P spins out of control on the addict's downward spiral of dependency, paranoia, and depression, as he must find ways to keep coming up with the money to fool his family and fund his growing addiction. The bets get bigger and bigger, until finally, faced with the ultimate financial crisis, he hits it really big. Yet winning, he soon learns, is just the beginning of a deeper problem. The one constant for P--who rises from wage-earner to millionaire and back again in his roller-coaster-ride of a life--is that he must gamble. That his son has died, that his wife is leaving him, that his girlfriend has been arrested, that he has no money, that he has more money than he could ever have dreamed--are all lesser concerns for P as he constantly seeks out new gambling opportunities. While other books on gambling seek either to sermonize on the addiction or to glorify it by highlighting its few prosperous celebrities, All or Nothing is an honest, straightforward account of what it is like to live as a gambler--whether a high-rolling millionaire playing $1,000-ante poker in Las Vegas or a regular guy at the local Indian casino praying for a miracle as he feeds his meager life savings into the unforgiving slot machine. All or Nothing is the first novel to dig beneath the veneer to explore the gambler's unique and complex relationship with money. If you've ever wanted to get into the heart and psyche of a compulsive gambler, here is your chance. Preston L. Allen is a recipient of a State of Florida Individual Artist Fellowship and author of the thriller Hoochie Mama, as well as the collection Churchboys and Other Sinners. His stories have appeared in numerous magazines and journals and have been anthologized in Brown Sugar (Penguin) and Miami Noir (Akashic). He lives in South Florida. New York Times Book Review, Sun., June 15, 2008 "As a cartographer of autodegradation, Allen takes his place on a continuum that begins, perhaps, with Dostoyevsky's Gambler, courses through Malcolm Lowry's Under the Volcano, William S. Burroughs's Junky, and] the collected works of Charles Bukowski and Hubert Selby Jr...Like Dostoyevsky, Allen colorfully evokes the gambling milieu...Like Burroughs, he is a dispassionate chronicler of the addict's daily ritual, neither glorifying nor vilifying the matter at hand. Yet he never wallows like Lowry nor amuses like Bukowski. His spare, efficient prose could be called medium-boiled." Library Journal, Nov. 15, 2007 "Allen's new novel poignantly depicts the life of P . . . Told without preaching or moralizing, the facts of P's life express volumes on the destructive power of gambling. This is strongly recommended and deserves a wide audience; an excellent choice for book discussion groups." Kirkus Reviews, Sept., 15, 2007 "A gambler's hands and heart perpetually tremble in this raw story of addiction . . . Allen's brilliant at conveying the hothouse atmosphere of hell-bent gaming." ForeWord, Jan/Feb. 2008 "All or Nothing is funny, relentless, haunting, and highly readable."

Preston L. Allen is a recipient of a State of Florida Individual Artist Fellowship and author of the thriller Hoochie Mama, as well as the collection Churchboys and Other Sinners. His stories have appeared in numerous magazines and journals and have been anthologized in Brown Sugar (Plume Penguin 2001) and Miami Noir (Akashic 2006). He lives in South Florida.
or
Not Currently Available for Direct Purchase
Copyright © 2020 American Booksellers Association