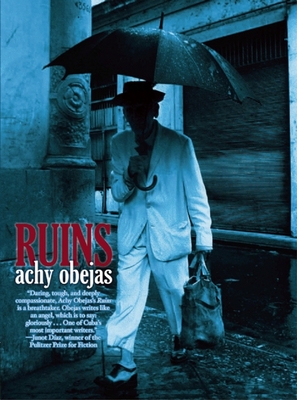 A true believer is faced with a choice between love for his family and the Cuban Revolution. "Daring, tough, and deeply compassionate, Achy Obejas's Ruins is a breathtaker. Obejas writes like an angel, which is to say: gloriously . . . one of the Cuba's most important writers."
--Junot Diaz, Winner of the Pulitzer Prize for Fiction "In the Havana of Ruins, scarcity can only be fought with ingenuity, and the characters work very hard at the exquisite art of getting by. The plot rests on the schemes of its weary, obsessive, dreamy hero--a character so brilliantly drawn that he can't be dismissed or forgotten. A tender and wildly accurate portrait, in a gem of a novel."
--Joan Silber, author of The Size of the World "Obejas evinces a new, focused lyricism as she penetrates to the very heart of the Cuban paradox in a story as pared down and intense as its narrator's life."
--Booklist (*starred review*) "Compassionate and intriguing . . . Obejas plays out the book's] conflicts in measured, simple prose, allowing her descriptions of the mundane--houses, food, dominoes--to illuminate a setting filled with heartbreak, confusion and decay . . . At her best, Obejas controls the mixture of humor and pathos that suffuse this poor community."
--Los Angeles Times "Ruins is a beautifully written novel, a moving testament to the human spirit of an unlikely hero who remains unbroken even as the world collapses around him . . . A fine literary achievement, it's Achy Obejas at her very best."
--El Paso Times " A] superb novel . . . Highly recommended."
--Library Journal " An] honest and superbly written book."
--Miami Herald "With the deft and evocative detail of a poet's, Obejas's prose is as illuminating and honest as her struggling protagonist."
--Publishers Weekly Usnavy has always been a true believer. When the Cuban Revolution triumphed in 1959, he was just a young man and eagerly signed on for all of its promises. But as the years have passed, the sacrifices have outweighed the glories and he's become increasingly isolated in his revolutionary zeal. His friends openly mock him, his wife dreams of owning a car totally outside their reach, and his beloved fourteen-year-old daughter haunts the coast of Havana, staring north. In the summer of 1994, a few years after the collapse of the Soviet Union, the government allows Cubans to leave at will and on whatever will float. More than 100,000 flee--including Usnavy's best friend. Things seem to brighten when he stumbles across what may or may not be a priceless Tiffany lamp that reveals a lost family secret and fuels his long repressed feelings . . . But now Usnavy is faced with a choice between love for his family and the Revolution that has shaped his entire life. Achy Obejas is the author of various books, including the award-winning novel Days of Awe and the best-selling poetry chapbook This Is What Happened in Our Other Life. She is the editor of Akashic's critically acclaimed crime-fiction anthology Havana Noir, and the translator (into Spanish) for Junot Diaz's The Brief Wondrous Life of Oscar Wao. Currently, she is the Sor Juana Writer in Residence at DePaul University in Chicago. She was born in Havana and continues to spend extended time there.

Achy Obejas is the award-winning author of Days of Awe, Memory Mambo, We Came all the Way from Cuba So You Could Dress Like This?, and editor of Havana Noir. A long-time contributor to the Chicago Tribune, she was part of the 2001 investigative team that earned a Pulitzer Prize for the series, 'Gateway to Gridlock.'
Loading...
or
Not Currently Available for Direct Purchase