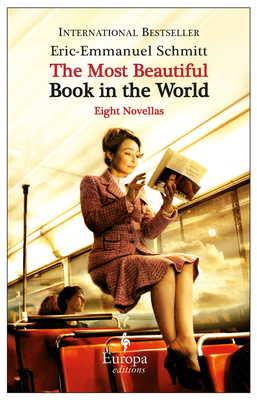 The Most Beautiful Book in the World

A cast of extravagant and affecting characters lovingly portrayed by Eric-Emmanuel Schmitt animates these eight contemporary fables about people in search of happiness.

One of Europe's most popular and bestselling authors, Eric-Emmanuel Schmitt captivates the reader with his spirited style and enchanting stories that move effortlessly from the everyday to the fantastical. The eight stories in this collection, his first to be published in English, represent his best and most imaginative storylines: from the touching and surprising love story between Balthazar, a wealthy author, and Odette, a shop clerk, to the tale of a barefooted princess; from the moving title story about a group of female prisoners in a Soviet gulag to the entertaining portrait of a perennially disgruntled perfectionist. Behind each story lies a simple, if elusive, truth: though we may be frequently blind to it, happiness is often right in front of our eyes.

Praise For The Most Beautiful Book in the World: 8 Novellas…

Praise for The Most Beautiful Book in the World

"The Most Beautiful Book in the World is as affecting as it is intelligent...Eight stories, parables on the idea of a future, filled with redeeming optimism. Truth and beauty are here brought together with all the visual beauty and power of a major literary work."
—Lire Magazine (France)

"A born story-teller with a talent for telling ostensibly simple tales, each suggestive of a philosophy of life, Eric-Emmanuel Schmitt [in The Most Beautiful Book in the World] takes the lid off the lives of eight women in eight contrasting portraits, each time with thought-provoking piquancy and suspense, that lead to an arresting and delightful end."
—La Libre Belgique (Belgium)

Eric-Emmanuel Schmitt is one of Europe’s most popular and acclaimed authors and playwrights. His many novels and story collections include The Most Beautiful Book in the World (Europa, 2009), Oscar and the Lady in Pink, and Monsieur Ibrahim and the Flowers of the Koran. A keen music lover, Schmitt has also translated into French The Marriage of Figaro and Don Giovanni from the original Italian. In 2001, he was awarded the French Academy’s Grand Prix du Théâtre. Schmitt divides his time between Paris and Brussels.

Alison Anderson's translation of Europa Editions include novels by Sélim Nassib, Amélie Nothomb, and Eric-Emmanuel Schmitt. She is the translator of Muriel Barbery's bestselling novel The Elegance of the Hedgehog.
or support indie stores by buying on