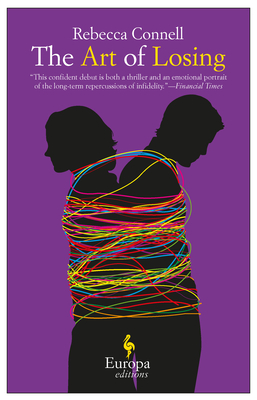 The Art of Losing

Rebecca Connell's brilliantly crafted debut novel examines the consequences of betrayal and the legacy of loss.

At the age of five, Louise lost her mother in a tragic accident. Now eighteen years later, she remains convinced of the truth she glimpsed as a girl, that her mother's lover Nicholas, an Oxford professor, was responsible for her death. And so Louise becomes Lydia, hiding her identity behind her dead mother's name and setting out to confront Nicholas. At first she watches him from the shadows, but a chance meeting with his son provides the pretext Louise needs to fully insinuate herself into the unsuspecting professor's life as she plots her revenge.

Nicholas, meanwhile, may not know who Lydia really is, but her name alone evokes memories of his harrowing and passionate affair all those years ago. His and Lydia's intense and torturous romance changed the course of his life. Despite his success and his seemingly perfect family, memories of its awful conclusion haunt him still.

Alternating between two different perspectives on the same tragedy, Connell deftly probes the contours and shortcomings of memory. Acute and penetrating, the Art of Losing mesmerizingly builds toward its stunning conclusion and Connell's "finely-crafted mood of curdled sensuality and gathering menace" (The Independent) holds true to its course until the very last dramatic twist.

Praise For The Art of Losing…

Praise for The Art of Losing

"This confident debut is both a thriller and an emotional portrait of the long-term repercussions of indifelity."
—Financial Times

"This assured psychodrama by a young South London writer is brimming with entertaining thrills."
—The Independent

"The sense of emotional loss and sexual confusion created by this 29-year-old author grips you to the last page."
—Harper's Bazaar

"The Art of Losing is a taut, convincing exploration of the pressures of love and the price of infidelity, and like the passion it so vividly describes it grips from the first and refuses to let go. For sheer readability, Rebecca Connell's debut novel takes some beating."
–Rupert Thomson, author of Divided Kingdom

"Connell gets under the skin with this part thriller, part heartfelt examination of betrayal and grief."
—The Guardian

Rebecca Connell graduated from oxford University in 2001. The Art of Losing is her first novel. She lives in London.
Loading...
or support indie stores by buying on