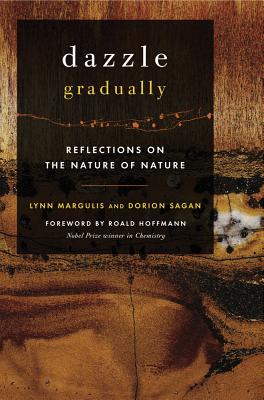 Reflections on the Nature of Nature (Sciencewriters)

At the crossroads of philosophy and science, the sometimes-dry topics of evolution and ecology come alive in this new collection of essays--many never before anthologized. Learn how technology may be a sort of second nature, how the systemic human fungus Candida albicans can lead to cravings for carrot cake and beer, how the presence of life may be why there's water on Earth, and many other fascinating facts.

The essay "Metametazoa" presents perspectives on biology in a philosophical context, demonstrating how the intellectual librarian, pornographer, and political agitator Georges Bataille was influenced by Russian mineralogist Vladimir Vernadsky and how this led to his notion of the absence of meaning in the face of the sun--which later influenced Jacques Derrida, thereby establishing a causal chain of influence from the hard sciences to topics as abstract as deconstruction and post-modernism.

In "Spirochetes Awake" the bizarre connection between syphilis and genius in the life of Friedrich Nietzsche is traced. The astonishing similarities of the Acquired-Immune-Deficiency-Syndrome symptoms with those of chronic spirochete infection, it is argued, contrast sharply with the lack of evidence that "HIV is the cause of AIDS." Throughout these readings we are dazzled by the intimacy and necessity of relationships between us and our other planetmates. In our ignorance as "civilized" people we dismiss, disdain, and deny our kinship with the only productive life forms that sustain this living planet.

Lynn Margulis (1938-2011) who served as a Distinguished University Professor in the Department of Geosciences at the University of Massachusetts at Amherst, received the 1999 National Medal of Science from President Bill Clinton. She was a member of the U.S. National Academy of Sciences starting in 1983 and of the Russian Academy of Natural Sciences from 1997 forward. Author, editor, or coauthor of chapters in more than forty books, she published or had her work profiled in many journals, magazines, and books, among them Natural History, Science, Nature, New England Watershed, Scientific American, Proceedings of the National Academy of Sciences, Science Firsts, and The Scientific 100. She made numerous contributions to the primary scientific literature of microbial evolution and cell biology. Margulis's theory of species evolution by symbiogenesis, put forth in Acquiring Genomes (co-authored with Dorion Sagan, 2002), describes how speciation does not occur by random mutation alone but rather by symbiotic detente. Behavioral, chemical, and other interactions often lead to integration among organisms, members of different taxa. In well-documented cases some mergers create new species. Intimacy, physical contact of strangers, becomes part of the engine of life's evolution that accelerates the process of change. Margulis worked in the laboratory and field with many other scientists and students to show how specific ancient partnerships, in a given order over a billion years, generated the cells of the species we see with our unaided eyes. The fossil record, in fact, does not show Darwin's predicted gradual changes between closely related species but rather the "punctuated equilibrium" pattern described by Eldredge and Gould: a jump from one to a different species. She worked on the "revolution in evolution" since she was a graduate student. In the last fifteen years of her life, Margulis co-authored several books with Dorion Sagan, among them What is Sex? (1997), What is Life? (1995), Mystery Dance: On the Evolution of Human Sexuality (1991), Microcosmos: Four Billion Years of Evolution from Our Microbial Ancestors (1986), and Origins of Sex: Three Billion Years of Genetic Recombination (1986). Her work with K.V. Schwartz provided a consistent formal classification of all life on Earth and has lead to the third edition of Five Kingdoms: An Illustrated Guide to the Phyla of Life on Earth (1998). Their classification scheme was generated from scientific results of myriad colleagues and its logical-genealogical basis is summarized in her single-authored book Symbiosis in Cell Evolution: Microbial Communities in the Archean and Proterozoic Eons (second edition, 1993). The bacterial origins of both chloroplasts and mitochondria are now well established. Since the mid-1970s, Margulis aided James E. Lovelock, FRS, in documenting his Gaia Theory, which posits that the Earth's surface interactions among living beings, rocks and soil, air and water have created a vast, self-regulating system. From the vantage of outer space the Earth looks like an amazing being; from the vantage of biochemistry it behaves in many ways like a giant organism. Dorion Sagan is author of numerous articles and twenty-three books translated into eleven languages, including Notes from the Holocene: A Brief History of the Future and Into the Cool, coauthored with Eric D. Schneider. His writings have appeared in The New York Times, The New York Times Book Review, Wired, The Skeptical Inquirer, Pabular, Smithsonian, The Ecologist, Co-Evolution Quarterly, The Times Higher Education, Omni, Natural History, The Sciences, Cabinet, and Tricycle. He edited Lynn Margulis: The Life and Legacy of a Scientific Rebel, a 2012 collection of writings addressing Margulis's life and work.
Loading...
or
Not Currently Available for Direct Purchase