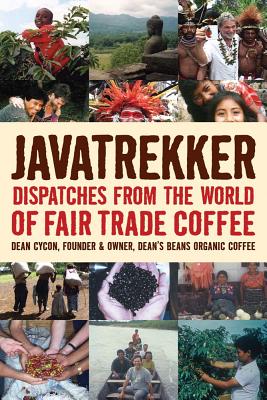 Dispatches from the World of Fair Trade Coffee

In each cup of coffee we drink the major issues of the twenty-first century-globalization, immigration, women's rights, pollution, indigenous rights, and self-determination-are played out in villages and remote areas around the world. In Javatrekker: Dispatches from the World of Fair Trade Coffee, a unique hybrid of Fair Trade business, adventure travel, and cultural anthropology, author Dean Cycon brings readers face-to-face with the real people who make our morning coffee ritual possible.

Second only to oil in terms of its value, the coffee trade is complex with several levels of middlemen removing the 28 million growers in fifty distant countries far from you and your morning cup. And, according to Cycon, 99 percent of the people involved in the coffee economy have never been to a coffee village. They let advertising and images from the major coffee companies create their worldview.

Cycon changes that in this compelling book, taking the reader on a tour of ten countries in nine chapters through his passionate eye and unique perspective. Cycon, who is himself an amalgam-equal parts entrepreneur, activist, and mischievous explorer-has traveled extensively throughout the world's tropical coffeelands, and shows readers places and people that few if any outsiders have ever seen. Along the way, readers come to realize the promise and hope offered by sustainable business principles and the products derived from cooperation, fair pricing, and profit sharing.

Cycon introduces us to the Mamos of Colombia-holy men who believe they are literally holding the world together-despite the severe effects of climate change caused by us, their "younger brothers." He takes us on a trip through an ancient forest in Ethiopia where many believe that coffee was first discovered 1,500 years ago by the goatherd Kaldi and his animals. And readers learn of Mexico's infamous Death Train, which transported countless immigrants from Central America northward to the U.S. border, but took a horrifying toll in lost lives and limbs.
Rich with stories of people, landscapes, and customs, Javatrekker offers a deep appreciation and understanding of the global trade and culture of coffee.

In each cup of coffee we drink the major issues of the twenty-first century-globalization, immigration, women's rights, pollution, indigenous rights, and self-determination-are played out in villages and remote areas around the world.

What is Fair Trade Coffee?
Coffee prices paid to the farmer are based on the international commodity price for coffee (the "C" price) and the quality premium each farmer negotiates. Fair Trade provides an internationally determined minimum floor price when the C plus premium sinks below $1.26 per pound for conventional and $1.41 for organics (that's us ). As important as price, Fair Trade works with small farmers to create democratic cooperatives that insure fair dealing, accountability and transparency in trade transactions. In an industry where the farmer is traditionally ripped off by a host of middlemen, this is tremendously important.

Cooperatives are examined by the Fairtrade Labeling Organization (FLO), or the International Fair Trade Association (IFAT), European NGOs, for democratic process and transparency. Those that pass are listed on the FLO Registry or become IFAT members. Cooperatives provide important resources and organization to small farmers in the form of technical assistance for crop and harvest improvement, efficiencies in processing and shipping, strength in negotiation and an array of needed social services, such as health care and credit. Fair Trade also requires pre-financing of up to sixty percent of the value of the contract, if the farmers ask for it. Several groups, such as Ecologic and Green Development Fund have created funds for pre-finance lending.