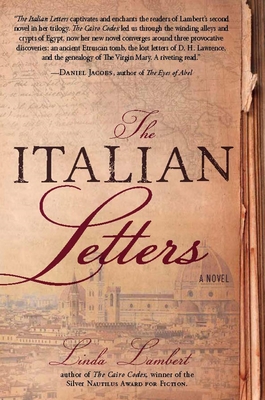 The Italian Letters lies in the sensuous curvature of ancient, 20th and 21st century Italy. The sequel to The Cairo Codex follows the adventures of anthropologist Justine Jenner after she is expelled from Egypt in the wake of discovering the diary of the Virgin Mary. Exiled into Tuscany, Justine finds herself embroiled in three interwoven stories of discovery: the long-lost letters of D. H. Lawrence to her great grandmother, Isabella; an ancient tomb revealed the origin and migration of an ancient people pre-dating Rome; and the genealogy of the Virgin Mary and Jesus. While shaken by the frank revelations in Lawrence's letters and the intimate relationship between the primeval Etruscan's and Jesus' mother, Justine must confront her own sexuality and yearning for personal freedom. The second in a trilogy, The Italian Letters is riveted with literary, religious, and archeological history and international politics, each narrative magnifying and altering the meaning of the others.

Linda Lambert is professor emeritus at California State University, East Bay, and a full-time author of novels and texts on leadership. During her extensive career, she has served as a social worker, teacher, principal, director of adult learning programs, university professor, and state department envoy to Egypt. She lives in The Sea Ranch, California.
Loading...
or support indie stores by buying on