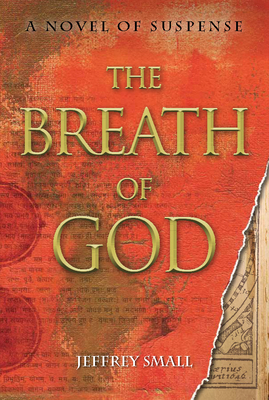 The Breath of God

A murder at the Taj Mahal. A kidnapping in a sacred city. A desperate chase through a cliffside monastery. All in the pursuit of a legend that could link the world's great religious faiths. In 1887, a Russian journalist made an explosive discovery in a remote Himalayan monastery only to be condemned and silenced for the heresy he proposed. His discovery vanished shortly thereafter. Now, graduate student Grant Matthews journeys to the Himalayas in search of this ancient mystery. But Matthews couldn't have anticipated the conspiracy of zealots who would go to any lengths to prevent him from bringing this secret public. Soon he is in a race to expose a truth that will change the world's understanding of religion. A truth that his university colleagues believe is mere myth. A truth that will change his life forever--if he survives.

Praise For The Breath of God: A Novel of Suspense…

"The Breath of God is a spectacular thriller that spans the world, history, and the limits of imagination; an epic adventure that left me yearning for more"
Rich Doetsch, author of The Thieves of Darkness and The 13th Hour

"As with many contemporary thrillers revolving around a spiritual quest, the novel contains chases, murder, and romance. Verdict This tale is for fans of Dan Brown's thrillers as well as readers who enjoy visionary fiction."
Library Journal

"This meticulously researched, thought-provoking masterpiece is filled with high adventure and intrigue. Based on an actual document from 1887 claiming to have seen controversial religious texts, Small’s stunning debut reveals the impact of such a find."
RT Rating: 4 1/2 stars TOP PICK!
RT Book Reviews

"Jeffrey Small explodes on the writing scene with his first novel and this book has Best Seller written all over it! The Breath of God is a riveting novel that grips the reader from the first chapter and does not let go until the last paragraph. Fans of the Celestine Prophecy (James Redfield), and Conversations with God (Neale Donald Walsch) will place The Breath of God right alongside these books in their library!"
FeatureMe2 Reviews

JEFFREY SMALL, a Harvard/Yale/Oxford-educated speaker on religion and spirituality, makes an impressive literary debut ... Small’s themes, such as the common ground of the world’s religions, are timely.
Atlanta Magazine

The Breath of God is a spellbinding novel, full of suspense as well as the thrills of a lifetime. Very hard to put down. It also brings religion to the forefront of the reader's mind, no matter what faith he or she follows, raising questions that have not been asked before, as well as bringing other parts of the world into the living room. Not to be missed. Excellent reading.
Bookloons.com

"First time novelist Jeffrey Small has created a thrilling adventure tale that spans cultures and religious traditions while also exploring fundamental spiritual truths. I was intrigued by the unique proposition that lies at the heart of the plot and captivated by the characters that keep the story moving. If you enjoy reading a fast moving mystery with the added bonus of a challenging investigation of religious beliefs then this is the book for you."
Steve Floyd, CEO August House Books and Story Cove

"In this gripping tale played out against an intriguing international setting East meets West, mystery meets romance, the human spirit meets the divine spirit and the reader meets a novelist of the first caliber."
The Honorable Raymond Seitz, former U.S. Ambassador to Great Britain

"In his first novel, Small...puts an interesting spin on the age-old secret that could undermine Christianity."
Pubishers Weekly

What fun, for the heart and for the soul! In this compelling thriller, Jeffrey Small treks through a fascinating nineteenth century legendor is it a hoax, or is it a healthy exercise in our broadening spiritual awareness? In this delightful book, Small also explores the popular distinction between religion as exploitation and religion as mysticism. Enjoy it!”
The Very Reverend Samuel G. Candler, Dean of the Cathedral of St. Philip

From the very first pages, The Breath of God will draw you in! Jeffrey Small's masterful storytelling will take you from Himalayan monasteries to the American Bible Belt in a heart pounding adventure filled with twists, turns and shocking revaluations that will rock the foundation of traditional Christianity. This gripping roller coaster of a novel will keep you guessing until the very end. If you liked The Da Vinci Code, you will love this book.
Darren Main, author of Yoga and the Path of the Urban Mystic

"In Dan Brown-esque fashion, Jeffrey Small has crafted a thriller based on historical research, scholarship, and his own creative gift. The book is for those who are not afraid to think or ask the question What if?” It engages the reader on many levels with a tension between action and ideas; it offers pleasurable escape but also food for thought. Small is right on target with characters we love and those we love to hate, a taut narrative that spans 2000 years and transports the reader halfway around the world, abundant sensory detail that invites us to smell, taste, hear and feel what the characters are experiencing, and a heart-stopping pace that won’t let you relax. A very impressive debut that solidly hits the mark!"
Kathy McClelland, Director of Libraries, The Westminster Schools, Atlanta, GA

The Breath of God, the debut thriller by Jeffrey Small, is sure to create controversy while exploring the plausibility of an ancient legend that could tie the world’s religions to each other. Although fiction, Mr. Small paints a colorful and realistic depiction of India that reflects the multi-faceted environment of daily existence in that country. Mr. Small also weaves a suspenseful journey for protagonist Grant Matthews that keeps the reader coming back for more. The most intriguing aspects of the book, in my opinion, are the parallels drawn among the major world religions and how such religions connect despite their many differences. A must read for those that love suspense and mystery; also for those who wish to expand their knowledge of the world’s religions, check out this novel.”
Kenneth A. Cutshaw, Former Honorary Consul of India

"Adding to his impressive scholarship work on world religions, Jeffrey Small distinguishes himself as a great story teller in his first novel, The Breath of God. Small brings the reader on a page turning adventure, as Grant Matthew’s goes east in search of the ancient mystery of Issa. This story of mystery and intrigue leads the reader down a fascinating path toward uncovering the origins of the world’s major religions. The history, the legend, the suspense and the story of The Breath of God will keep the reader on the edge of his seat from start to finish.”
Rev. Lang Lowrey, President of The General Theological Seminary

Jeffrey Small skillfully maneuvers this spectacular historical mystery between the Indian subcontinent and the American south, where Evangelicals go to war against a scholar’s tantalizing discovery. You’ll be fascinated by the stunning connections between the world’s faiths that Small unveils against today’s background of savage religious hostilities.”
Parul Hinzen, ArtsCriticATL.com

This was a page turner! From the very first sentence to very last word this book kept me captivated. It's a combination of religious/mystery/historical/modern day thriller and I found it to be just about unputdownable....The descriptions of place are so well written I almost felt like I was actually there. The thriller aspect had me racing through the pages to find out what was going to happen next. Overall this was a fascinating tale of what can lurk behind blind faith and what is possible if you open your mind.
BrokenTeepee.com

A Breathless Quest.....Jeffrey Small executes perfectly the all-too-often violent struggle between blind belief and unbelieving intelligence alongside the mystical quest upon which all the world's religions rest. Few religious novels can be entertaining, educational and inspiring at the same time, but The Breath of Godpulls off this literary hat trick adoitly.
The Progressive Christian

"A fast-paced adventure with a deep backdrop of religious scholarship."
--Kirkus Reviews