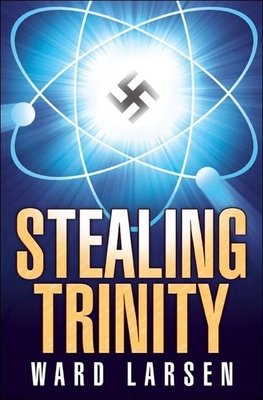 In the last days of WWII, the Third Reich makes a desperate grab to retrieve its most valuable asset—Die Wespe, a spy buried deep in the Manhattan Project. The man chosen for this mission is Alexander Braun—American born, Harvard educated, and a ruthless killer.

British Intelligence learns of the Nazi plan. Unable to convince their American counterparts of the magnitude of the threat, they dispatch Major Michael Thatcher to track down Braun.

The trail leads to Rhode Island, where Lydia Cole, a young heiress, has unwittingly taken Braun back into her life. Braun is forced to run, and there is one place where he must go—Los Alamos, home of the Manhattan Project.

On July 16, 1945, the world’s first atomic bomb is tested—code name Trinity. In the days that follow, four people—a tenacious British investigator, a determined young woman, a killer, and the spy who could compromise America’s greatest scientific endeavor—will have a fateful rendezvous, all vying for control of the secret that will shape the world.

Perfect for fans of Tom Clancy and Daniel Silva

“Once in a while a great book comes along and the reader knows with the first page, they’ve encountered something special, something worthwhile. Stealing Trinity is just that book.” —Crime & Suspense Magazine

“For readers who can’t get enough of the Manhattan Project in fiction.” —Booklist

“An innovative, original plot marks Larsen as an author to watch.” —Publishers Weekly

“Stealing Trinity is an exceptional thriller that will captivate readers with its strong plot and even stronger characters.” —Mysterious Reviews

Ward Larsen is a USA Today best-selling author and three-time winner of the Florida Book Award. His work has been nominated for both the Edgar and Macavity Awards. A former US Air Force fighter pilot, Larsen flew more than twenty missions in Operation Desert Storm. He also served as a federal law enforcement officer and is a trained aircraft accident investigator. Look for Amber Entertainment's film adaptation of Larsen's first thriller, The Perfect Assassin. His other novels include Fly by Wire, Fly by Night, and Passenger 19.
Loading...
or
Not Currently Available for Direct Purchase