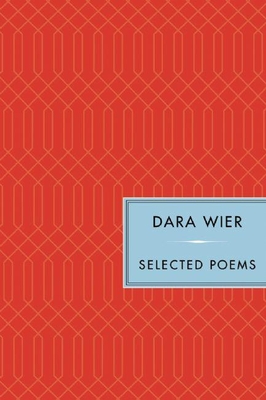 Dara Wier's Reverse Rapture is a mosaic whose colossal proportions contradict the mundane character of its countless self-contained tesserae. It may not be for the faint of heart--most intense experiences aren't--but those who stay with it will find themselves face to face with a world whose eerily sharp focus suggests recent satellite photographs of Mars. And they will never be the same again.--John Ashbery

Spanning 1977 to 2006, Selected Poems is a major retrospective that will stand as an indispensable record of turn-of-the-millennium poetry. The progression of Dara Wier's poetry over the last thirty years mirrors--and simultaneously transcends--the evolution of American poetry, from the lyric poems of the Deep South to the complex intensity of poems in more recent volumes such as Remnants of Hannah and Reverse Rapture. Selected Poems confirms Dara Wier as one of contemporary poetry's most important and insistent voices.

Dara Wier is the author of ten collections of poetry, most recently Remnants of Hannah (Wave Books, 2006) and Reverse Rapture (Verse Press, 2005). She is the recipient of numerous fellowships and awards, including those from the Guggenheim Foundation and the NEA, and she has taught at numerous universities and conferences throughout the country. Wier is on the permanent faculty of the University of Massachusetts Program for Poets & Writers.

Dara Wier is the author of numerous collections of poetry, most recently Remnants of Hannah (Wave Books, 2006) and Reverse Rapture (Verse Press, 2005). She is the recipient of numerous fellowships and awards, including from the Guggenheim Foundation and the NEA. She lives in Massachusetts, where she teaches and directs the MFA writing program at the University of Massachusetts Amherst.
Loading...
or
Not Currently Available for Direct Purchase