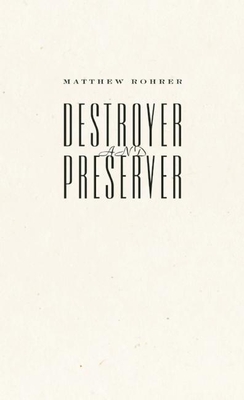 Rohrer has an enchanting willingness to look outward, a willingness not to grasp the world using old means which have failed us, even if no new means present themselves ready-made.--Judges' citation, the 2005 International Griffin Poetry Prize

Griffin Poetry Prize finalist Matthew Rohrer illuminates the modern plight: trying to figure out how to be a thoughtful citizen, parent, and person as the landscape of terror and history worms its way into our everyday existence. Unnervingly humorous, casual, and tender, Rohrer's poems help us investigate our lives as he investigates his--openly and with a generous presence.

Matthew Rohrer is the author of five previous books of poetry, including A Plate of Chicken, Rise Up, Satellite, and A Green Light, which was shortlisted for the 2005 Griffin Poetry Prize. He is also co-author of Nice Hat. Thanks. with Joshua Beckman, with whom he has participated in performances at the Museum of Modern Art in New York City and the Henry Art Gallery in Seattle. He received the Pushcart Prize and his first book, A Hummock in the Malookas, was selected for the National Poetry Series by Mary Oliver. He lives in Brooklyn, New York, and teaches at New York University.


Praise For Destroyer and Preserver…

"Rohrer’s new collection Destroyer and Preserver’’ finds him struggling to synthesize his multiple selves: He’s a father, a husband, a poet, an American, and a man with a heart/ it is too big for my clothes." Michael Brodeur, Boston Globe

Matthew Rohrer is the author of A Plate of Chicken, Rise Up, A Green Light, Satellite, and A Hummock in the Malookas. With Joshua Beckman he wrote Nice Hat. Thanks. and recorded the audio CD Adventures While Preaching the Gospel of Beauty. His poems have been widely anthologized and have appeared in many journals. He's received the Hopwood Award for poetry and a Pushcart prize. A Hummock in the Malookas was selected for the National Poetry Series, and A Green Light was shortlisted for the Griffin International Poetry Prize. Recently he has participated in residencies/performances at the Museum of Modern Art (New York City) and the Henry Art Gallery (Seattle). Matthew Rohrer was born in Ann Arbor, Michigan, was raised in Oklahoma, and attended universities in Ann Arbor, Dublin, Ireland and Iowa City. He teaches in the creative writing program at NYU and lives in Brooklyn.
Loading...
or
Not Currently Available for Direct Purchase