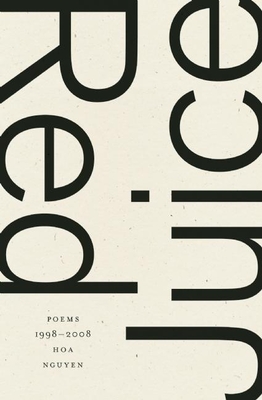 Hoa Nguyen's poems probe dailiness to divorce us from our base assumptions about how language might present the world to us. Her poems comprise some of the most inviting lyrics I've found in a living poet.--Bookslut

Phrase by phrase Nguyen's work can be conversational, playful, funny, angry, acutely self-aware, and loaded with sensory information.--Anselm Berrigan, from the introduction

Red Juice represents a decade of poems written roughly between 1998 and 2008, previously only available in small-run handmade chapbooks, journals, and out-of-print books. This collection of early poems by Vietnamese American poet Hoa Nguyen showcases her feminist ecopoetics and unique style, all lyrical in the post-modern tradition.

Born in the Mekong Delta and raised in the Washington, DC, area, Hoa Nguyen studied Poetics at New College of California in San Francisco. With the poet Dale Smith, Nguyen founded Skanky Possum, a poetry journal and book imprint. She is the author of eight poetry books and chapbooks and lives in Toronto, Ontario, where she teaches poetics at Ryerson University and curates a reading series.

Hoa Nguyen is the author of several books of poetry, including As Long As Trees Last, Red Juice, and Violet Energy Ingots, which received a 2017 Griffin Prize nomination. As a public proponent and advocate of contemporary poetry, she has served as guest editor for The Best Canadian Poetry in English 2018 and judge for the 2020 Griffin Prize for Poetry, and she has performed and lectured at numerous institutions, including Princeton University, Bard College, Poet's House, and the Banff Centre's Writers Studio. Recipient of a 2019 Pushcart Prize and a 2020 Neustadt International Prize for Literature nomination, she has received grants and fellowships from the Canada Council for the Arts, the Ontario Arts Council, the MacDowell Colony, and the Millay Colony for the Arts. Her writing has garnered attention from such outlets as The PBS News Hour, Granta, The Walrus, New York Times, and Poetry, among others. Born in the Mekong Delta and raised and educated in the United States, Nguyen has lived in Canada since 2011.
Loading...
or support indie stores by buying on