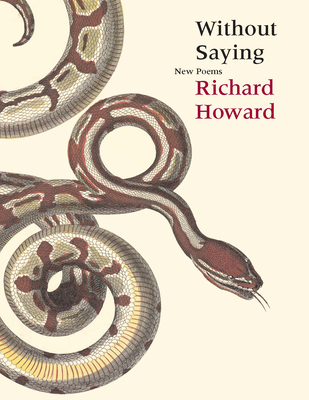 In Richard Howard's new collection, voices of myth and memory prevail, if only by means of prevarication: the voice of Medea's mother trying to explain her daughter's odd behavior to an indiscreet interviewer; or first and last the voice of Henry James, late in life, faced with the disputed prospect of meeting L. Frank Baum and then, later on, managing not only Maeterlinck's Blue Bird but his own unruly cast of characters, including Mrs. Wharton and young Hugh Walpole. Richard Howard's honors include the Pulitzer Prize, the PEN Medal for Translation, and grants from the Guggenheim and MacArthur foundations.

Richard Howard was born in Cleveland in 1929. He is the author of 13 volumes of poetry and has published over 150 translations from the French including works by Gide, Stendhal, De Beauvoir, Baudelaire and De Gaulle. He has edited the Library of America's edition of the Travel Writing of Henry James. His honors include the Pulitzer Prize.
Loading...
or
Not Currently Available for Direct Purchase